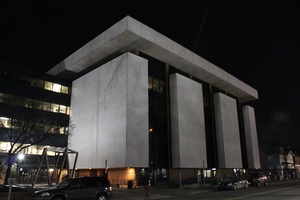 The Institute for Social Research in March 2013 (CC-BY-3.0 Dwight Burdette)

Aka the ISR. Samples of people -- direct observation, direct them back to populations. 80 PIs are at ISR doing surveys -- and a huge range of other studies.

The Program in Survey Methodology

A collaboration for graduates (soon to be an undergraduate / graduate degree) is housed in the ISR, and degrees are granted through Rackham. It trains people to be survey scientists. Michigan departments provide resources and teachers -- research is paid through ISR. The graduates are paid professionals. Taught with a research-program approach, the PSM generates people to do real-ivory-world work.

25 students are enrolled. Many come from countries without this style of graduate program. Faculty teach practical application, statistical methods, survey methodology, cognates, and other topics.

Jobs are found through the Michigan Mafia in the Social Sciences, Michigan's network of operatives. You can't get away from Michigan people.

The ISR is on the western edge of Central Campus, next to the SAB. It's by Division street, which divided the dry part of town with wet part (they were on the dry side). Started short after WWII, with people coming out of govt. service. Mostly interested in the lives of the wives of farmers. They were originally in the basement of the University Hospital -- then the basement of the School of Education.

1948 election put them on the map. Harry Truman was about to stand for election -- a lot of political polling was happening (Gallup, Roper) showed that Truman was going to lose. TV wasn't in peoples homes, but radio was; the counting process was done by wire. It took 24 hours to get results back. Polls were wrong -- Truman won. National Elections Study from the ISR had used new data methods -- and got the result almost perfectly right. This put UM Social Science research on the map.

There is a lot of quantitative Social Science on campus. The emphasis of ISR is research, which focuses the organization on two things: raising research funds, and running projects. The dept. does not grant degrees. One of the functions of the Institute is training, mostly through a variety of summer programs. ISR courses are well-known in the social sciences through its training programs.

The Reuters University of Michigan Survey of Consumers. Asks people about their sentiment. Started in 1947 -- was done every quarter, face-to-face. Moved to telephone in the 1970s. Response rates have fallen -- so they think of moving to a mixed mode. Interviews last 15-30 minutes. The core interview is 15-30 minutes. Landline phones are called -- 500 selected, half are random digit dialed (45% are actual homes), then a follow-up months later. About 14% of US 2007 is mobile only. Historical lows in response rates -- 40% initial, 75% of follow-ups.

The index remains about 1-2 months ahead of the economy.

Alcohol use (or at least the answers) over 30 days has fallen nationally over the last 30 years. There's also a 20-30% falloff of smokers.

Derek does facial motions, smiles. Still is very creepy. ("I can't give you any more information about the question"). ROBOT RESPONDER still doesn't work so well.

Are people honest when telling a robot personal things? (ed.: If the survey agent is as creepy as ROBOT Victoria, the answer must be no)

Focus is not on fraud -- rather, can citizens use the voting machines as intended? The error rate for voting was never 0.

42 voters came into an Ann Arbor lab. UROP researches coded the videos in very fine detail. Voters also completed a satisfaction questionnaire. The fewer the actions, the higher the satisfaction.