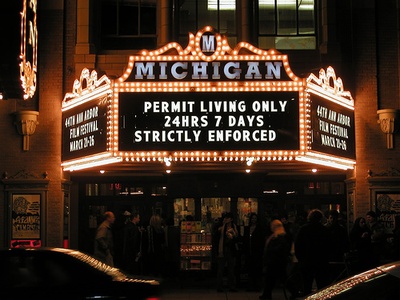 
The Michigan is a beautifully restored art theater at 603 E Liberty St in Ann Arbor that has both live performances and movies in its main theater and the smaller, recently added screening room. The Ann Arbor Symphony Orchestra plays its concerts here; movie selections include art films, documentaries, and others not generally found in other theaters in the area, and often only play for a week. The theater has added facilities for showing microcinema productions, funded by a State of Michigan Cool Cities Grant, the Ann Arbor Downtown Development Authority, and other local matches.

The theater is owned and run by the non-profit Michigan Theater Foundation, which also runs the State Theatre. Russ Collins is executive director and CEO.