Located in Kerrytown, Monahan's Seafood Market has been owned and operated by Mike Monahan since 1979. Monahan's has been known for years for providing a wide variety of high-quality fish, and the ability to order pretty much anything that swims (in season, with two days notice). 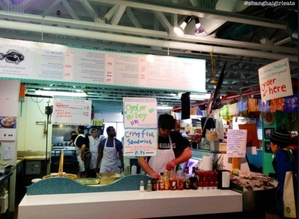 The counter at Monahan's Seafood Market.

They also carry a number of take-home-to-cook specialties such as fish en papillote, salmon burgers, chowders and microwave-meals.

The fact that they will cook anything in their case for you however you want it has been a well-kept local secret. In March 2006, it became a lot less secret, as Monahan's made a move into the restaurant market, with the addition of a chef. They've added more items to their menu (including fish and chips), and run a variety of daily specials--Baja Fish Tacos (every Monday), Crispy Fish Sandwich (every Friday), Fried Oyster Po'Boy (most Saturdays). You can get lunch for under $10 easily, or even under $5 if you want a bowl of chowder and some bread.

The shop serves only lunch, Monday through Saturday from 11 a.m. until 3 p.m. They sell chowder and bagels & lox all day on Sunday.

Monahan's Seafood Market: You can get good seafood in Michigan! – Current magazine, December 2011