Shinola, a company that features Detroit-made watches and bicycles, is opening its first Ann Arbor store in May 2015. The downtown retail outlet at 301 S. Main is located at the southeast corner of Main & Liberty. 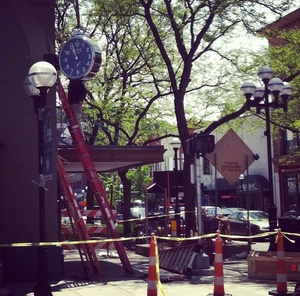 A clock was installed outside of Shinola's Ann Arbor store on May 20, 2015.

The company was created in 2011 by Tom Kartsotis - founder of Fossil watches - and is owned by Dallas-based Bedrock Manufacturing and Swiss watch components producer Ronda.

The Ann Arbor store is located in a spot formerly occupied by Selo/Shevel Gallery, which closed in 2014. Gallery owners Elaine Selo and Cynthia Shevel also owned that building, and sold it to Dr. Reza Rahmani in March 2014. Rahmani, who owns several downtown Ann Arbor properties, renovated the entire building and is leasing it to new tenants, including Maize & Blue Deli and Title Boxing Club.

Shinola will dedicate 1,495 square feet of street level space to its Ann Arbor retail operation, including a Commonwealth coffee shop. On the 2,000-square-foot lower level, the company will have a community lounge that will be open to the public. It will feature table tennis, café seating and event space for gatherings.

The Ann Arbor location is Shinola's seventh brick-and-mortar store. It has other locations in New York, London, Minneapolis, Los Angeles and Chicago.