The steps of MLK Student Union

This building was named for Martin Luther King, Jr. in 1985, seventeen years after he gave his anti-Vietnam War speech from the steps of Sproul Hall 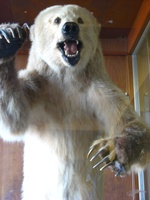 The eponymous animal, located in the Bear's Lair MLK Student Union houses the ASUC, Berkeley's student government. It has many conference rooms available for student-use, including the Pauley Ballroom and a study lounge/computer lab on the first floor. On the ground floor, students can find the ASUC Bookstore and Bear's Lair restaurants, including the popular Bear's Lair Pub.