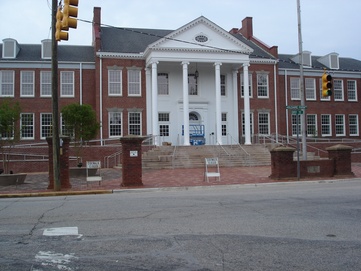 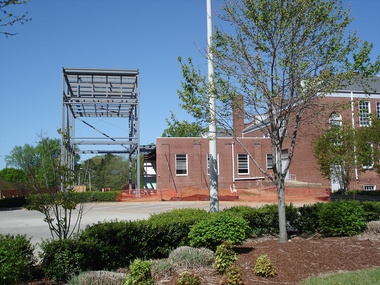 Construction of new flytower, 2010 (photo by Brent Miller, courtesy of Friends of the Page-Walker Hotel)The visual focal point of the district, and perhaps the entire downtown, the Neoclassical Revival former high school building sits on a slight hill overlooking downtown Cary at the southern end of S. Academy. Built in 1939 by the Works Progress Administration for $132,000, the two-story, red-brick building is the last of a succession of school buildings that were located on this same site, its prominent location clearly illustrating the significant role of education in Cary’s history.

In 2006, the school was purchased by the Town of Cary for use as a cultural and performing arts center. In 2008, work  began on the conversion to an arts center, which now anchors the cultural arts district in the Heart of Cary. Design work proceeded into 2009. In 2010, construction work was proceeding apace on the conversion to the Cary Community Arts Center. In 2011, the renovation was completed. After much debate and much public input, the Cary Town Council officially christened the newly repurposed building “Cary Arts Center”. Town Staff began moving into the building in May 2011; it opened to the public in July 2011, with a formal re-dedication in August 2011.

Resident artists include the Concert Singers of Cary and the Cary Players. 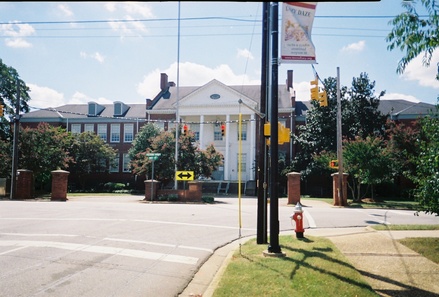 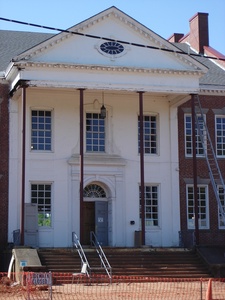 2010 facade renovation. Non-original Doric columns removed prior to installation of new Ionic columns that more closely resemble the originals (photo by Brent Miller, courtesy of Friends of the Page-Walker Hotel)