Kenan Memorial Stadium, located in the heart of the University of North Carolina at Chapel Hill’s campus, is home to the North Carolina Tar Heels football team. The stadium is regarded as one of the most picturesque venues in America, surrounded by the Carolina pines that grow in Chapel Hill.

The Tar Heels are currently led by Hall of Fame coach Mack Brown, who previously coached the team from 1988 to 1997. Brown was hired in 2018 to replaced Larry Fedora after a 2-9 season. 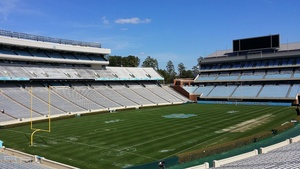 Kenan Stadium has been the home of the University of North Carolina football team since 1927, when the team played the stadium's first game against Davidson College.

The Tar Heels' have won a program-best 11 games in four different seasons in Kenan Stadium, most recently in 2015 under head coach Larry Fedora. Mack Brown is the winningest coach in Kenan's history, with 76 wins between 1988 and the present. UNC's first win over a Top-5 program came in 2004 in Kenan Stadium against No. 4 Miami, when Connor Barth kicked a 42-yard field goal on the final play to topple the then-undefeated Hurricanes. 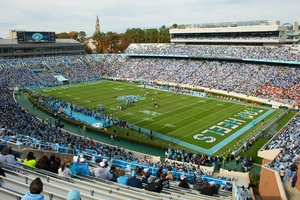