Pantana Bob’s, known more commonly as Bob’s, is a sports bar located at 300 West Rosemary St. in Chapel Hill. The bar is recognized by its wall-to-wall mural depicting an interpretation of a paint-by-number image of the Carolina football team. With outdoor patio seating, the bar serves as a popular spot to watch UNC basketball games in the springtime. On Thursday, Friday and Saturday nights, the inside of the restaurant is converted to a dance floor with beach music performers such as Liquid Pleasure and The Embers. The bar occasionally hosts trivia nights to support local and on-campus philanthropies.

The mural that covers one of the outer walls of Bob's. 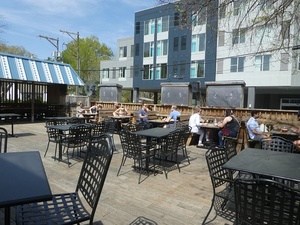 Outdoor patio seating at the bar.

Bob’s has a Southern take on traditional bar food. The menu offers a variety of options, from hot dogs to hoagies, but it is widely known for its wings. Hailed by Bob’s as “the best wings in the Triangle,” the bar serves wings in four flavors, including buffalo, Caribbean, salt and pepper and “smooty style,” a mix of the buffalo and Caribbean sauces.

On Thursday through Saturday nights, Bob’s partners with Sutton’s Drug Store and serves some of their customer favorites at a food truck located outside the bar. The food truck stays open even after most of the bars have closed on Franklin Street. The food truck offers mac and cheese bites and jalapeno poppers.

Bob’s usually has a $5 cover charge, which does not include a drink. Customers who arrive before midnight on weekend nights do not have to pay a cover. Bob’s is open on Mondays from 4 p.m. to 2 a.m., and all other days of the week from 12 p.m. to 2 a.m.

Here’s a selection of customer reviews about the food and the atmosphere at Bob’s: