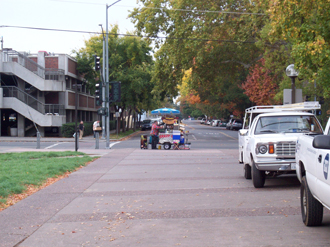 Crazy Dog is a hot dog cart which sets up on Chico State campus at the corner of First and Ivy Streets. The Geiger family has been operating this business since August of 1999. Crazy Dog is open every school day and serves regular hot dogs (crazy dogs), polish sausages, spicy Cajun sausages, and two types of vegetarian hot dogs. They also sell sodas, energy drinks, chips and cookies. They offer a wide variety of condiments for the dogs, including two types of Sierra Nevada mustard.

While many people consider Crazy Dog as being on the Chico State Campus, it technically is operated on the sidewalk belonging to the City of Chico. In early 2003 the University took actions to attempt to oust Crazy Dog by asking the City of Chico to give up the property. A Feb 12 city memo read "California State University, Chico has petitioned the City of Chico to abandon a portion of the intersection of West 1st Street and Ivy Street so it can control vendors on this portion of the sidewalk." The Geiger's countered this with a petition drive of their own, collecting over 2500 signatures to "Save Crazy Dog!" Just hours before the City Council meeting, the University dropped their request1.