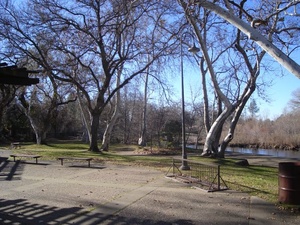 The picnic area at Five Mile 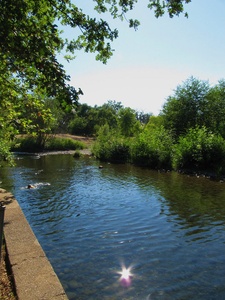 Five Mile Recreation Area is a picnic area in Bidwell Park. Whether it is a part of Lower Park or Upper Park is a matter of debate (or some would argue it is both, depending on which side of the creek you are on). In addition to picnic tables, Five Mile has restrooms, drinking fountains, and barbecues. Be aware that, as a part of the park, the usual glass and alcohol bans apply during any celebrations. There are stairs into the creek, allowing for swimming access during the hot summer months.

There are some beavers that call the creek through Five Mile home, and have periodically built dams across the creek both upstream and downstream from the dam that sometimes diverts waters to the Lindo Channel. This causes problems with the flow of water downstream, and the city has previously attempted to mitigate these problems while not harming the animals. In Winter of 2008/2009 the beavers were a reasonable distance upstream of Five Mile but were not causing problems that would necessitate city intervention.

Prior to the mid eighties, the north bank was a grassy slope that extended down into the water.  During the summer months, the water level was raised to just below the level of the deck on the south bank.  (Much like One-Mile)  This made it a prime swimming location on long, hot mid-summer nights.