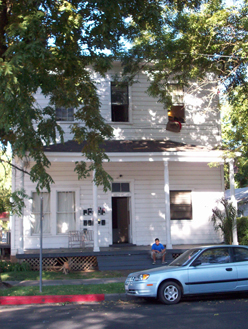 Victorian Palms (originally called the Mary Jane White School, and more recently and Meyer Apartments and the Kappa Sigma House) is a house in the South Campus Neighborhood. It was most recently occupied by the Kappa Sigma Fraternity from June of 2009 through January of 2011. The building is divided into four living areas: A five bedroom main house, two-one bedroom apartments, and eight suites on the top floor, connected via an interior corridor. To the south of the property is a detached garage.

This is a large 3-story, rectangular Vernacular Style residence with shiplap siding and rests on a brick foundation. The main façade is symmetrically arranged with double-hung windows on either side of the central original glass and wood panel door with rectangular transom above. There are three evenly spaced windows on the second floor under a low-pitched hip roof of composition shingles. A plain frieze encircles the building under boxed eaves. A wood veranda, with a blue painted ceiling, stretches across the façade with four simple, turned posts as support. There are entrances on both the north and south sides. The building has gradually been remodeled but still retains its original look.

This is one of Chico's earliest remaining schools and although no traces of the schoolrooms exist in the interior, it has maintained its essential exterior integrity. Mary Jane White arrived in Chico with her mother in 1867 and within a few years was teaching school. She acquired a lot for $1 from General Bidwell in 1872 on which to build a private school next to her residence. The school was erected in Oct. and Nov. of 1873 with Bradley and Maxon as the architects and builders. School opened on Dec. 1, 1873, with students charged $3 and $3.50 each. In July of 1877, W.L. Bradley enlarged the school and added on the second floor eight "lodging rooms for young ladies and lady teachers, music rooms, parlor, etc." School recommenced in mid-Sept. In 1886, it was announced in the local newspaper that Miss White and W.S. Hall were managing the Chico Normal and Scientific School, although she seems to have maintained her private school until her death in 1891. Charles Reser bought the building in 1898 and within a month his son-in-law, Dr. H.R. Smith, was advertising "a private institution for the treatment of medical and surgical diseases" at 7th and Salem. Thomas Fleck, a Chico policeman, purchased the property in 1903. Thomas' father had accidentally shot himself in 1887 while moving his son and wife into Miss White's lodging rooms.

It may be eligible for listing on the National Register of Historic Places.