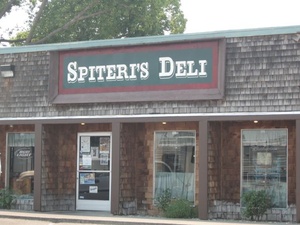 Spiteri's Deli in the Fairview Center

Spiteri's Deli is an often overlooked restaurant in North Chico that is tucked away in the Fairview Center, which itself is an often overlooked shopping center. It is a favorite among locals, known for their inexpensive sandwiches and sides. A sandwich will run you about $6, but can often supply a normal appetite two meals. The menu features a large selection of meats and cheeses. Meats include everything from the usual suspects like ham and turkey to some more unusual choices like liverwurst and meatloaf. In addition to freshly made-to-order sandwiches, Spiteri's offers a wide selection of salads (again the usual choices and some less usual like shrimp macaroni and Japanese cabbage) and sides. 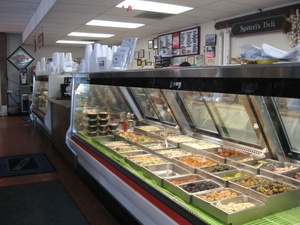 The glass case of salads and sides at Spiteri's Orders can be phoned or faxed in advance. This is especially advisable if you are getting your order to go and will be rushed, as it is a busy lunchtime destination for locals. If you opt to order there, proceed to the counter, where you will be faced with a menu sign that has obviously been in existence for a very long time. One-by-one, the staff make each customer's sandwich to order. The sides and salads are presented in a glass case right in front of you as you order, and the chips are right behind you, should you decide to add to your meal. Sodas or Sierra Nevada Brewery beer round out the meal.

Spiteri's is also in the catering business. The catering menu offers what you would expect from a deli: party sandwiches by the foot (2, 4 or 6 foot available), party trays, and hors d'oeuvres. They also have a selection of dishes for catering events that require full meals, including main dishes, salads, sides and desserts. Dishes can be purchased separately if you only want the main dish or the side, or in combinations prearranged by Spiteri's. When purchasing a full dinner combination, charges are per person and will vary depending on the entree.