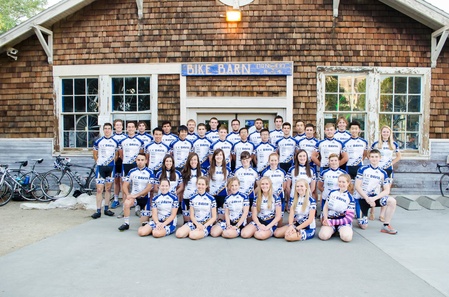 The Cal Aggie Cycling Team (UC Davis Cycling) offers opportunities for individuals of all skill levels to compete in road, mountain, and track cycling events. The club provides a welcoming environment for new riders as well as challenges for experienced racers with training camps and clinics offered to help develop skills essential to riding in race situations. 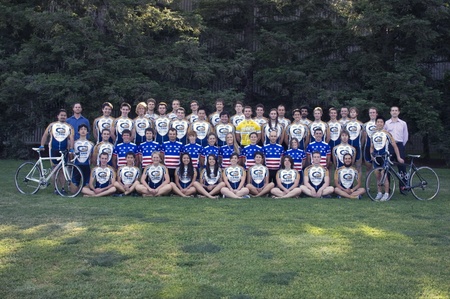 The full 2009 team, including the Nationals winning A-team in the center

Within the first weeks of school and continuing on until the end of October the team hosts short, easy and social road rides to teach group riding skills, introduce new riders to the sport, and help new riders meet team members and other riders with which to ride. These rides leave every weekday from the Bike Barn on campus at 3:15pm. The rides are great opportunities to meet the team, get information, and develop basic riding skills. Other fall and winter team functions include skills clinics and a weekend long training camp in Bodega Bay in January.

Training begins in November and ramps up through winter in preparation for the Road Racing season, which takes place from February until April. After the road season ends and throughout the summer many members compete in non-collegiate road races, or they begin training for their next mountain bike season the following fall.

Racing is divided into categories—A through D for men, and A through C for women. The D and C categories are for beginners and the A categories for top elite level racers. The lower categories race over distances as short as 20 miles while the men's A category will often race 70-90 miles, sometimes more.

The team competes in the Western Collegiate Cycling Conference—comprising many California Schools plus UNR—and travels to schools as far away as UCSD and UNR. The total points accrued based on placings from all the categories of all the races determines the overall Conference Winner, and indeed part of the team's success lies in its having talent in every category.

After the Conference Championships, the members of the A team, men and women, travel to the National Championships, to compete against the other Division 1 schools across the country. 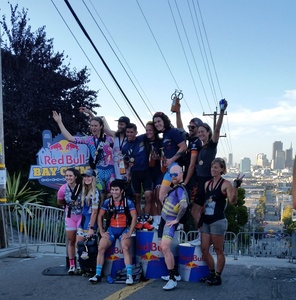 The aggies have been known to dabble in other cycling events in the area, with prowess on the track at Hellyer in San Jose, Enduro races (such as at Rockville in Fairfield), domestic racing, fixed gear crits, and hill climbs.

Matt Llanes - the shreddiest and most sendy rider to ever grace the presence of both the mountain and road bike teams.

The best way is to show up to the early fall quarter rides in October. See UC Davis cycling  on facebook for ride updates and to message the team directly for information!
We have weekly meetings Tuesday nights at 7:30 in Roessler 66 starting in Fall quarter and running to around May (meeting stop a couple weeks after collegiate nationals).

Join our Google Group, the main source of communication between team members

2009-09-16 10:25:56   By the way, if you were wondering who that yellow clad guy in the center of the team picture is, that's Jay Abolofia, he got that jersey for winning the Men's C Omnium (basically the most individual points earned by high finishes in that category) an achievement to be proud of, no doubt. —KtotheF

2011-08-20 13:34:30   Awesome experience with these guys! I am sad I only got to be on the team for one year, but I love seeing these guys out on the trails. It really was a fun and rewarding experience. If you have a chance to join the team, or just go out for a bike run, do it! —davisaggie1