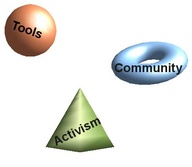 Davis Open Science is a group that is interested in how the future of science is going to depend on building community and truly sharing knowledge. If you are not that familiar with open science ideas, here are several components that you may relate to:

The group's purpose will be to build a community for sharing knowledge and resources and to bring together a unified voice on Open Science ideas. The group would encompass three core ideas:

We have met informally on the first Wednesday of each month at 5:30 @ the Delta of Venus, but due to sparse attendance we have adhoc meetings when we plan events. Ask on the listserv for information.

Join the email list here. (The email is publicly viewable and anyone can join.)

Past Talks and Events

Getting Famous Or Getting Scooped?: Risks and Opportunities in Sharing Your Science and Scholarship

Come to this workshop to get the scoop on getting scooped. Getting scooped is a reality in research and this workshop will explore the ways that one can publish successively without the fear of being scooped. We will have three panelists who are experts in the field to answer your questions and lead the discussion. The first hour of the workshop will be devoted to a few short presentations from the panelists and the second to an interactive discussion with the audience. This enlightening workshop will provide a forum to help explore questions such as: Has someone ever published your results before you did? Should you fear being scooped? Have you ever shared your results pre-publication and it been beneficial? Are you in neck and neck competition for funding and your research has to be secret until publishing?

Lunch will be provided but you must RSVP at https://www.surveymonkey.com/s/M9QCRBY by 12:00 on Monday 11/28 so lunch may be ordered.

Sponsored by the Center for Science & Innovation Studies and Davis Open Science. 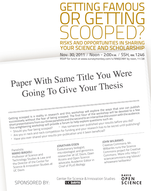 2010-03-02 09:09:01   no, definitely not. The group is open to anyone that is interested in the topic, but we will be physically based in Davis and most likely utilize the campus for events and such. —JasonMoore

2010-03-02 13:06:27   @ES We'd love to here about all the different open access ideas. Right now we trying to get some people together and brainstorm about what the group will be and do. We'd love to have some more information on hybrid and delayed open access ideas. Would you be interested in talking to us about these, either through our email list or an upcoming meeting? —JasonMoore

2010-03-03 15:26:35   I added a little logo I originally made up for the openwetware site, just to have some visual there. Think we could use a better design though, since it doesn't really say anything about open science. I like the open lock symbol designed by PLoS to indicate open access and the simple, intuitive icons associated with each of the creative commons licenses, maybe they'd give inspiration to someone more artistically inclined then me to make a group logo? —Carl

2011-01-12 00:08:15   I'd be interested in diggeng deeper into this. Would you be interested in participating in the City of Davis study regarding the Olive Drive Railroad Fence? —BruceHansen