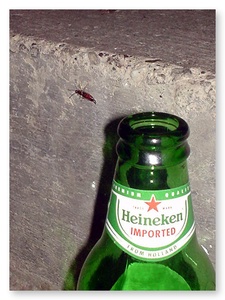 Earwigs are flattened insects, about 1 inch in length. Some have a pair of leathery forewings covering a few segments of the abdomen and the membranous hind wings, with protruding tips. These "forceps" are used primarily for defense and courtship and cannot harm people. Earwigs are primarily scavengers (dead insects and rotting plants). Some species are predators and some species will emit a foul odor. Only a few of the winged species are good fliers. There are over ten species in America, but four are most common and likely to invade homes. These include the European, the Shore, the Ring Legged and the Seaside Earwig. Some of these have wings, some have stripes on their abdomens, some are dark brown, but all have pinchers. Despite this, the pincers of most earwigs here are unable to actually pinch with a force hard enough to hurt, and are mostly a deterrent to prevent earwigs from becoming a snack for a predator.

Earwigs are nocturnal. During the day they will be found in moist shady places, under wood piles, stones, boards, compost piles, flower beds, and other secluded locations. Earwigs can cause damage to cultivated plants and can be a nuisance when they migrate indoors, though they seldom become established indoors. When earwigs migrate indoors, they hide in cracks and crevices around baseboards and other locations. They may be found in potted plants and cut flowers.

Earwigs can be of value as predators of certain insect pests because they are both plant and insect eaters. Plant damage can be extreme and looks much like slug damage; the main difference is that slugs will leave a slimy trail behind where earwigs leave no foot prints. Although it is most common to find small irregular holes, earwigs will readily eat all of the "meat" of a leaf leaving only a skeleton frame behind.

Possibly named after an old belief that these insects crawled into peoples ears to lay eggs in their brains. They do like dark and hidden places, but even if they were able to get into the ear canal they would only be able to go as far as the eardrum.

Males can grow a spare set of genitals in case the other pair is damaged.