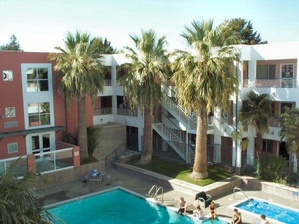 Emerson Hall was a fine dorm situated just Northwest of campus. It closed in 2019 and was replaced by Shasta Hall, which opened in 2021 for the fall quarter. It was part of the Cuarto area. Living situation was suite-style, with 4-6 people to a suite. Sometimes crazy things ended up in the pool, like shopping carts, road signs, fish, or bicycles. Freshmen have way too much time on their hands.

Emerson had been known for its false fire alarms. Firefighters have been known to pull sleepy freshman out of bed.

The closest DC was the Cuarto Dining Commons, which was remodeled in 2010 before the start of the fall quarter. The convenience store formerly in Emerson Hall has since been moved there.

There were two laundry rooms on the ground level. One in the very corner of poolside and the other on grass side is located on what is known as the "lego", because protrudes out of the main structure into the courtyard and is red. You could just claim a locker to put your detergent by putting a lock on it.

2012-02-05 11:05:15   This dorm is fucking horrible. I lived here last year and didn't believe the rumors of it being less social, but it was terrible. Things might be different in different years, but for us you'd never find an open door, people wouldn't even open their blinds, people wouldn't watch things in the TV common room, and people would only really do things with their suitemates. We went through the entire year without even meeting our neighbors because we never saw them.

I think it's pretty bullshit that a dorm, something with the sole purpose of meeting people and acclimating you to college, can even have rumors of being antisocial, let alone having it be true, especially with the completely debilitating cost of it. They should either eliminate the cuarto dorms altogether or give people living in them a huge discount over the normal dorms because of how horrible they are —LRonHubbard