Intro - What is Jalapeño Water? 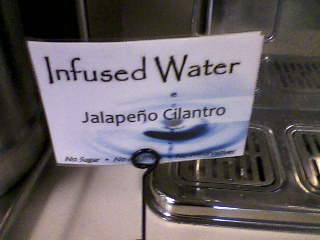 On October 9, 2010 during lunch at the Cuarto Dining Commons, there was a great discovery: The Jalapeño Cilantro Infused Water (Jalapeño Water for short). It was the most amazing beverage ever. When you drink it, it feels and tastes just like water. But once it is swallowed, you get the awesome jalapeño burn and the best part is the only thing to wash the burn down with is more jalapeño water, unless you get some other drink (but what’s the fun in that). Basically what happens is jalapeños are sliced and allowed to sit in water. During this time, the capsaicin (the chemical that gives the burn) dissolves off the seeds of the jalapeños and into the water ready to burn any tissue it comes in contact with.

Since then the Jalapeño water has yet to return to the dining commons and only lives on in the stories told by its admirers. Many comment cards have been filled out at the Cuarto Dining Commons saying things such as "Jalapeño Water! Where did it go?" and "What happened to the Jalapeño Water? I love that stuff,” but still no sight of any return. The comment cards mentioning the Jalapeño water also all seem to disappear and never end up on the board with responses like all the other comment cards. It was sighted on April 12, 2011 someone taking a jalapeño water comment card to the table where they respond to them, but the card was never seen again. Where do they go? The only logical explanation is that it is all part of a conspiracy to keep the students that visit the dining commons from enjoying a good beverage and keeping the food as non-spicy as possible (has anyone ever found a dish at the dining commons with the slightest bit of heat?).

At late night on April 12, 2011, students informed the dining common staff that they aware of the conspiracy through a comment card (which also disappeared with no response) and will continue to write the comment cards inquiring about the Jalapeño Water until a response is received and it becomes a regular beverage available multiple times a week at the dining commons.

End of the Conspiracy

On April 13, 2011 (which just happened to be the day this page was created, coincidence?) the conspiracy ended at dinner when two of the Jalapeño Water comment cards were seen with responses on the comment board, one being the one where the dining common staff was informed students knew about the conspiracy. One response explained that they rotated the flavors of infused water and that since the Jalapeño one was not very popular (why not?), it wasn't rotated in often. How about never? The second one said to prepare our palates for a new infused water with chilies and citrus. So now students wait for the new chili and citrus water and hope it is as amazing as the legendary Jalapeño Water.

On April 17, 2011, the Cuarto Dining Commons unveiled the Jalapino Citrus infused water for us Jalapeño Water lovers. It was the biggest disappointment ever! Correct me if I'm wrong, but I'm pretty sure there is no such thing as a Jalapino (even Google corrects it to Jalapeño and it's not recognized by spell check). Maybe it was a typo, but the peppers were red (the color of an over ripe Jalapeño). Worst of all, the peppers (whatever they were) were not even cut open, so the burn causing chemicals didn't dissolve into the water. This water gave no burn whatsoever. Lastly, the dispenser was going extremely slowly, so you couldn't even really get much. Nice try Cuarto DC, but this is not what we were promised when we were told to "prepare our pallets". Come on DC, what's going on?

Your community wants to know

Query: was this a contamination issue? Urban legend? Salsa-in-water? Condiment peppers in water? Back in the day, the Tercero DC commentboard used to get requests for more hotdogs on Sundays, guaranteed canned pineapples on the salad bar, rotten produce in prepacked sandwiches—a mixture of goofy and serious issues. I can't tell what this is, but it seems like management would assume it's simply an inside joke.

Response to the community

This is not an inside joke and all the events described above are true and actually occurred. The dining commons intentionally put this out one day as one of their infused waters. I have a picture on my phone of the label/sign that I am working to put on the site (yes I was so excited that I took a picture).

Response from the community

Dear college students who get the pleasure of the DC, it's not that hard to make infused water.. Cucumber water is delicious, so is Jalap/Hab/others fruits/veggies water. Slice, let sit, drink! Find out how long you like to let it sit, 24 hours is good, but it will have the taste by 12. 48-72+ hour cucumber water gets so deliciously cucumbery. Experiment with it and have fun