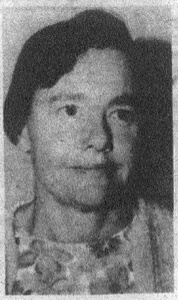 Janet Murray Jacob Yates (born 22 January 1926, Yucaipa, California; died 21 December 2016, Davis, California) served on the DJUSD School Board from 1973 to 1977. She served in the West Plainfield district seat which had been held by Robert Downie for 11 years before. After Jacob finished her term in 1977, the West Plainfield district seat reverted to another at-large seat in the district, following a district-wide public vote in 1975. This one district seat was a vestige of when DJUSD merged with the Fairfield school district, which only had one school, Fairfield School. A condition of the merger was the guarantee of board representation from residents of the old district.

Jacob earned a degree in Plant Sciences from UC Berkeley in 1946 and later earned a Masters in Horticulture from UC Davis.  She was married to Frederic C. Jacob from 1950 until his death in 1986.  After serving on the DJUSD school board, she worked in special education for the Yolo County Office of Education.  She married Wesley Yates in 1997.  She was also active in the group that brought the University Retirement Community to Davis.