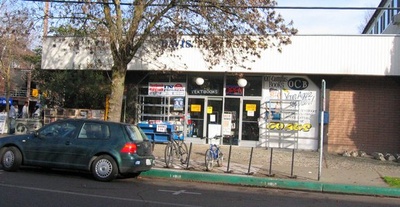 Off-Campus Books is the most prominent alternative to the campus bookstore. Sometimes their selection of texts for the current quarter leaves something to be desired. Customer service can be gruff at times. Their used books are as-is, so check to see that they are in usable condition prior to purchase.

If you are seeking textbooks for pleasure or general knowledge you can get good deals on books that are no longer tied to classes.

Receipts from an online textbook reseller shipping from the same address are labeled "Davis Textbooks", and some people refer to the store as such. The sign on the west side of the building also reads Davis Textbooks. Off-Campus Books used to have another store in Pleasant Hill, California. It closed down in the first few years of the 2000s.

They're more likely to be able to help than the campus book store if you are looking for either textbooks that aren't tied to classed offered that quarter, or ones that are of different editions.

It has been noted that they make buyback offers on the collection of what you bring in, not on each individual book. Some people haul their books between the two and find the higher offer. This can result in a difference between $40 at Off-Campus Books and $175 at the MU book exchange.

To prevent stealing, they have a policy where you have to leave your bags by the door and sometimes even outside. Not all bookstores have this policy so if you'd rather hold on to your bag or keep it secure, you may want to patronize another business.

2008-04-02 20:50:58   I just bought a book from this place and it was pretty decent price. I noticed that the prices were about the same or a bit more than the ones I could find on Amazon.com. I have never seen so many used books before! Heh. —Aarolye

2008-04-16 23:52:22   I dropped by once just to check out what textbooks they had. My backpack would not fit in their little cubbyholes, and I didn't want to leave it where someone else could grab it. So I left without even seeing what they had. Too bad for them, making it too inconvenient to shop there... —IDoNotExist

2008-04-17 11:24:12   I hate that, "leave your bag at the door" policy. Look, we're not all thieves. I hate being treated like a criminal. Just because a few people steal, doesn't mean we all steal. Anyway, they might be cheaper, but if it's too inconvenient, I'll go ahead and pay a few more bucks elsewhere. The book may cost more, but at least you're treated with a modicum of respect as a customer. —CurlyGirl26

2008-09-02 14:28:13   This place was very rude to me when I went to go sell back my book. When I asked them if they could purchase my book, the guy cut me off when he saw the book in my hand and told me that the edition that I had was too old and they weren't purchasing it anymore. Unfortunately, even though it is one edition older, the UCD Bookstore buys the book back for $70.00. It's unfortunate that they are rude up front, I did not even say anything to provoke them. —IdealParadigm

2009-03-15 13:39:42   When I went to return a book I bought approximately for $100, they wrote me "store credit" for $95. They didn't add "tax paid" on the slip until I mentioned it to them. Although their prices are cheaper I'd rather pay the extra $5 just to get friendlier customer service at the other book stores. —eatsoupwithsticks

2009-06-10 23:25:35   I really dont like this place. I bought a book here (sold out at UCD bookstore) and I didn't notice there was black tape on the front/back where it blended in with the cover. I took it off two weeks later and it say "Free Copy for Instructors NOT FOR RESALE", SHADY! I paid full price and they weren't even supposed to sell it, and there were some appendices/chapters missing from it.

The most annoying thing is that they do treat everyone like criminals. Once I left my backpack, got the book and went back to get my backpack (AND WALLET) and the girl got on my case about it...even though I was just walking over with my backpack/wallet to stand in line and pay. Apparently its possible to steal a book on my way to the cashier...3 feet of space.

I am never going there again, it truly is ridiculous how rude they are. Not everyone is a thief! —sgent

2009-11-14 23:42:36   When i first visited this store, i also disliked their policy of leaving the backpack in the front but once i witnessed a shoplifter who was trying to put the book in the backpack w/o paying for it. They called the police to handover the guy , i didn't like that rather they d ve just warned him, however crime is crime. The prices are always way cheaper than bookstore and also they bought all my books that main bookstore rejected paying more than i expected. I'd absolutely recommend!!! —exoticdreamer

2010-10-12 16:22:15   I bought two books from this place a while ago since I no longer have a use for them I was planning on selling them online. The only problem is that both textbooks have black tape in the front and the back. I decided to remove the tape in order to see why it had been added to the textbooks. These textbooks are REVIEW COPIES which really pisses me off since I paid almost $200 for both textbooks that I wont be able sell back. To be honest I don't know how these people are still in business. I wouldn't recommend anyone buying anything from this store!!! —XavierDavis

2011-01-14 14:50:56   They are possibly the rudest storekeepers I have encountered in Davis. Workers are unapproachable! I thought it was just me, but I'm not surprised anymore after reading these comments. I wish that Davis Copy Shop didn't refer their readers here. Otherwise, I would never step foot in this place again. —SusanChang

2011-10-30 14:50:02   I bought all of my textbooks here based on price for the ccurrent quarter, and have found that ALL of my books have writing in them. Some just a few notes here and there, others have full chapters underlined and highlighted. I didn't think to look closely before purchasing as I've never experienced this issue with any other bookstore on or off campus. The prices are definitely better, but be sure to thoroughly inspect books before buying. —NicoleLombard

2012-07-15 14:32:49   Bought books here for the first time at the beginning of Summer Session I. I read all of the comments above before I went. Luckily, all of the books I needed were there. As with any "used" condition book, I checked the books for highlighting/writing/damage. A lot of them had the aforementioned on the pages but not all of them. **IF YOU PLAN TO TRY TO SELL BACK ANY OF THE BOOKS YOU BUY FROM THIS PLACE TO THE UCD BOOKSTORE**: Be careful of the black tape! All but one of the copies of one of the books I needed had black tape over the covers. Upon peeling the tape back carefully at the top of the block of black tape on the back cover, I discovered that those books were "instructor's edition" books and were not for resale. THE UCD BOOKSTORE WON'T TAKE THESE. Take the effort to find one that doesn't have black tape; you'll actually get money for these ones for resale then. They also put a big barcode sticker from their store over the book's original barcode area. Don't know if this would be a problem when you're trying to sell them back, but I was able to remove them by first peeling off as much as possible, then laying a rubbing-alcohol-dampened/soaked washcloth over the label, letting it sit for a bit, and then rubbing off the sticker with the washcloth.

Overall, not a bad place to buy from, but read all the comments mentioned before and know what you're getting yourself into before coming to the store. —kimmisan

2012-07-15 14:35:23   **Edit to my above post: they were "review copies" and so were not resellable. Either that or insstructor's copies. Either way there's a reason for the black tape (hiding something) so if you want to resell any books you buy here, just avoid the black-taped-books. —kimmisan