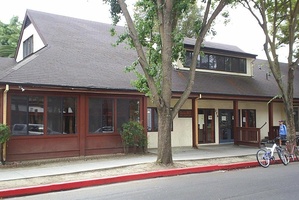 Orange Hut was a Chinese restaurant. They advertised healthy Chinese food cooked in canola oil, with no MSG. Close to campus and pretty good. Lunch was pretty cheap and it came with free fresh fruit and won-tons. The food there was closer to Marie's mother's cooking than any other Asian place in town, with the exception of General Tso's Chicken having red food coloring. That's true of most Chinese restaurants.

According to Wendy Weitzel of Comings and Goings, a Vietnamese noodle soup place from Sacramento is taking over the space and hopes to open in November 2011.

Also, these guys were AWESOME if you wanted to study there during lunch. As with every other study spot restaurant, you had to remember to buy something.

If you went there often and at the right time, you might have gotten some special treatment (i.e. a free potsticker or more food for less $).

As of 2003, at least, they sold bags of frozen potstickers.

For those of us unfortunate enough not to have Marie Huynh's mother to cook for us, this may be the next best thing. —SteveDavison

2006-06-05 17:17:39   I liked this place. It reminded me of an independent Panda Express ... with cool chips and orange slices. The food was a tiny bit lack-luster, but mostly very tasty and cheap! I'll definitely be returning. —SS

2006-08-04 09:00:35   orange hut is the local and generic version of panda express. i generally dislike americanized chinese food. as a matter of fact, it gives me stomach aches. orange hut specifically has terrible food because they remicrowave rice and the complementary fried wontons are greasy as fuck. they also overcharged me on my drink. AND IT COSTS MONEY FOR TEA. WTF? —EmilyTung

2006-12-02 18:49:57   this place is not very good. The fact that people are comparing the quality to panda express says enough. For better americanized chinese food try noodle express or jade garden. For even better chinese try shanghai town or Hometown Chinese Food—MattHh

2006-12-13 20:56:41   If you're vegetarian don't bother... not a great selection and what little there is, is not that good. There are plenty of cheap places with better selection and taste. —JohnHumperdinkle

2007-04-04 17:05:44   I love the healthy food w/out MSG here, since I am also sensitive to MSG! :( And I think the quality in Orange Hut is good enough! (You can't compare the fastfood restaurant with other real Chinese restaurant, right? At least this place is much better and more variety than Panda) I recommend their beef noodle soup, chips and fruit are great as well! —thebigshow500

2007-05-04 13:42:50   I had gone 2-3 weeks without Chinese food till I went here. I'm not sure what inspired me to go to this place for the first time after walking right by it for three years. As a vegetarian, there were only 2 dishes that I could order. I had the lunch special of white rice with steamed tofu & mushrooms and fried tofu & eggplant. The white rice was alright, could've been a bit softer but while the tofu & mushroom dish had a bit too much sauce but not too bad. However, the lady who worked there made sure I got a good amount of mushrooms! =) The eggplant was surprisingly better than I expected! The eggplant still retained it's bright purple skin rather than the usual shriveled up dark purple color other restaurants usually end up making. Oranges were plentiful and juicy! Lunch for $6 and a quick Chinese food fix was not too bad. Very close to campus so that's a definite plus!-VT —VivianTang86

2007-07-07 12:53:47   this place is alright, a bit expensive for pre-made food from big vats, some of it having sat there for quite a while, but it is usually really good. i introduced it to my vegetarian friend and he loved it. they were closed last Friday even though there was a giant sign that said "OPEN"... whatev... —GarrettGallegos

2007-11-03 20:24:44   I love their food so much!! Mainly it's because their Eggplant and Tofu dish is to die for!!! Not to mention the prices are incredible. Always a plus in my book. The only thing I have a problem with is the hours. Why oh why can't they be open later and on the weekends??? —StephanieCarlson

2008-03-05 15:37:27   This place seemed like a respectable joint until they decided to throw the styrafoam tray of now unappealing food into the microwave for a long minute before I paid for it. Had I known that was going to happen I would have never walked in—a sort of false advertising in my opinion. I will never return again. —jchammons

2008-11-10 23:34:19   I am ADDICTED to the spicy (it isn't really spicy...more garlic-y) eggplant with braised tofu. OMG! SO GOOD! AH! I order it with chow mien. Lately I have tried to avoid Orange Hut because #1 it is really addicting and #2 the eggplant is very oily and probably not very good for me. The prices are reasonable, and it is conveniently located just off of the campus (and a very short walk from my office) Their tap. drink is good as well and BOGO (buy one get one), order one for dine-in and another to take to class. Ah...I love Orange Hut...:D Aree Rating: 8.5/10 —ArianeMetz

2010-01-06 12:01:52   This is mediocre Chinese food but frankly, compared to what the nearby CoHo offers now that they're remodeling, Orange Hut is a veritable smorgasbord of hot food items. And their lite lunch is not much more expensive than some of the limited food items at the CoHo (except, maybe, pizza, but you can only eat their idea of what is pizza so many times...). Their lite lunch was more than enough to satisfy my hunger and need for spiced up food. —RyanMikulovsky

2010-03-18 18:17:05   Not too sure what is going on at this place, they are only open limited hours of the day but manage to stay in business? Went there close to 3 once (their closing time) and it was the bottom of the pan of the food and definitely not good, not good to the point of not being even comparable to panda express. Prices were ok and staff was really friendly, but my chicken didnt look much like chicken and had a weird taste. —cj2012aggie

I ate here once. —CovertProfessor

2011-09-30 23:09:30   Wow, sad to hear it's gone. This was a favorite for my friends and I when I was attending the university because of its close proximity. Not everything was great, but there were enough decent dishes to make it memorable. :'( —ScottMeehleib

2011-10-05 19:20:40   I was walking past this building today and saw a banner advertising the soon to be opened King 4 restaurant. What will they serve? Pho. How do I know this? A bowl, with the word 'pho' in it, was placed in front of the King 4 Restaurant. Keep it classy, Davis. —ChristyMarsden

2012-01-15 15:00:57   I used to eat here ALL THE TIME when I was an undergraduate. My boss also used to take me here pretty frequently for lunch. The eggplant tofu was always delicious and I loved the fresh orange slices they provided. I will really miss this place. —ArianeMetz