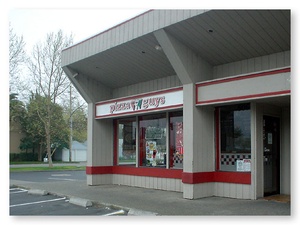 Pizza Guys is a large chain and one of the lower-priced Pizza places in Davis. Coupons come in the mail all the time. You can get a free 2-liter bottle of Pepsi or 8 oz. ice cream if you pick-up any pizza order. They also deliver for $2.95 (delivery fee was increased from $2 on 2011-02-19).

Apparently it is the Davis pizza location of choice for San Francisco 49ers coach Jim Harbaugh, who was spotted here Saturday, July 16th.

They now have gluten free option for custom 12" pizza.

A 3D view of Pizza Guys can be seen in Google Earth. This building was modeled by James Curtis Computing Solutions. To view this model now you can click Here.

2009-05-27 22:21:25   So, I used to think that Steve's had the best cheezy garlic breadsticks, but then I tried Pizza Guy's. THEY ARE FREAKING AMAZING. I love the cheese and garlic sauce, and they always serve it with ranch (but will give you marinara if you ask). I did have a problem with delivery once, because they couldn't find my apartment, then called me and said they were here, only to call back and say they weren't. I ended up having to walk away from my actual apartment to the front of the complex, only to find out they came to my door anyways after I asked them to stay at the sign. However, they did make it up to me by giving me extra breadsticks (although, I found it peculiar that they already pre-made them like they KNEW they were gonna screw up).

Also, they have great deals a lot of the time. But if you go for pick-up, make sure you bring mace, cuz that neighborhood is shaaaady. —BrookeB

2009-07-24 11:37:11   Update on my last posting (because I eat Pizza Guys way too much)- they really are stingy on the toppings, and they seem to take a long time to make pizzas. I've called and it sounded really dead in the store, and they've told me it's going to take 30 minutes or so, and then when we go pick up the pizza (and the store is dead) it's not even ready yet. They did a big oops on one of our orders, but they gave us a whole new pizza on top of the messed up one for free (but that could just be because some of the employees are Russian and I was hanging with a Russian fellow).

All in all, it's cheap and pretty tasty so I'll eat it, but Lamppost and even Papa John's are better. —Kiran

2010-03-25 16:34:02   This pizza is simply low quality. It is greasy but not in a good way. The crust on just a one topping is soggy and the sauce lacks flavor. The service is friendly but that is the only good thing coming from this pizza joint. —JoeRandom

2010-06-27 00:05:30   This place is awesome if you use their coupons. Most of the time you can just mention the coupon and not actually have one in hand, you can also print the coupons from their website. The pizza is not the best in town, but it isn't bad. I just got an extra large pepperoni delivered for 15.49. They are open late enough and are usually pretty fast if its not the weekend. My order was 45 min on a sat night. Tip the drivers a couple bucks if you can, they deserve it. —reviewaskew

2010-08-22 21:29:48   Fair pizza, commensurate with the price which is lower than the better pizza places in Davis. You definitely want to use a coupon and they are not hard to find. It seems like I get one mailed to me every week. There is one thing about Pizza Guys in Davis that really pisses me off ....... for pickup orders, as a matter of standard operating procedure, they are always 5 - 25 minutes later than they tell you. Just got back from there and it went better than usual. On the phone the guy said it would be 10 - 15 minutes, I'm pretty sure this is his boiler plate statement. It was 23 minutes. I use the place because with a coupon it is inexpensive as fair pizzas in Davis go, and it is one block from my house. When I care to spend a little more and get the best pizza in town I get one from Steve's Pizza. Some other long time Davis residents may disagree with me and say Woodstock's Pizza is the best. However, those places are rather expensive. —djnurco

HORRIBLE SERVICE - do not go here! First, they are late on my pickup time, then they give me the wrong pizza, the wrong pasta. When I call the place to get my pizza replaced, they put me on hold for ten minutes, and the asshole manager Vova tells me to chill out when I complain about being forgotten on the phone, and then bitches when I ask him to redeliver the pizza. These guys are dicks. Could even get acknowledged at the counter. GO ELSEWHERE. —DavisLurker

2010-10-28 09:29:03   Having moved on from Davis, I will say that I really miss being able to order a pesto pizza. I always have to make my own if I want a pesto pizza, which defeats the idea of pizza as convenience food for a crowd (and I don't particularly like most pizza anyway). —JabberWokky

2011-02-23 00:48:06   Went to Pizza Guys late (after 9pm) today. Food was good but I felt extremely uncomfortable because a crowd of shady-looking loiterers started forming outside while I was eating inside. If you want pickup, go during the daytime. After nighttime, have it delivered. I had to call a cab. —rrenati

meh.. what can one expect from a place whose drivers drive like bats out of hell and employees who throw soda bottles on the roof of the place they work at... Yes, if you are the owner, take a look on your roof... not to mention the night-time smoke sessions they have in the parking lot from time to time, and I'm not talking about cigarettes. —Wes-P

2011-03-16 22:42:15   Admittedly, I'm not a big pizza connoisseur, but I immediately noticed the poor quality of the food that the Pizza Guys deliver. I have never really understood when people complain about bad-textures with pizza. I mean pizza is pizza, right? It's pretty hard to mess up. But the pizza I got from this place had noticeably rubbery cheese, fairly tasteless crust , and weirdly undercooked pepperoni (if there is such a thing)it was as if it was put on the pizza AFTER it was brought out of the oven.

In all, I'm not going to spend my money there again. My suggestion: If you want cheap, go cenarios [cheese = YUM, flavorful, melty], and if you want the primo delivered pizza I'd say get some the stuff from Steve's place. —someday909

2011-03-21 20:04:17   Did I already mention these guys are ALWAYS late. Well here I go again. I call in a order for pickup and they tell me it will be ready in 25 minutes. I arrive there 40 minutes later and the guy is like, 6 minutes, no 5 minutes. I walk out for a minute and walk back in to find him making my calzone and putting it in the oven. I ask "is that my order, did you forget about it?" He responds that he was busy taking and making orders. Dude, don't say 25 minutes if you're not going to start the thing until I arrive 40 minutes later. —djnurco

2011-08-09 16:41:35   Pizza and drugs is a good combination. You can purchase drugs from the unattractive, red headed fellow at Pizza Guys while he's working. One thing that's not cool, I've seen him sell weed to a pretty young looking kid. —friendthegirl

2011-08-24 20:08:18   theplace takes so long to get shit cuz ther are under staffed u get it stop bitchen bout it takin so long and tlk to the owners cuz the people ther for the most part work hard —bambamred

2011-08-24 22:07:46   I called to order a medium pizza one day for myself and one other person. The employee confirmed my order and then quickly said "an extra large would be cheaper," and hung up. He took my order from a medium to an extra large without consulting me at all. Even if it was more cost effective that was bizarre and not what I wanted. The pizza was just okay, nothing special. I had an inordinate amount of leftovers and have not gone back. —LoriOrf

2011-10-09 20:14:13   I used to like them, but they got two orders wrong IN A ROW. Something horrible happened to the customer service. So only go here if you're willing to A) wait forever or B) willing to have your order taken wrong. —Inyx

2012-05-08 23:50:07   Hi, I would like to leave my feedback about Pizza Guys Co and specifically the branch I'm the always customer at. I've been to a couple of different locations throughout Sacramento but my favourite is the one on L str in Davis, CA. Even though its a little far for me I go only there because of their delucious pizza that generously cooked by the family members. Those people because they are the family make this place special. They are so friendly, polite, pleasant to deal with, they always do everything to satisfy even the most picky customer. Service is great, atmosphere is friendly, place is very clean itself. Recently they bought new tables and chairs, I wish such places had TVs so we could come and watch soccer in this cosy pizzeria. But the most important is their pizzas and actually the whole menu, its cooked professionally. Lots of puzzeria try to cut expenses by underfilling pizzas with topings, Pizza in Davis is always overfilling thats really very nice of them cause I as a customer realise that people working there are trying to do a good business instead of cutting expenses by cooking unperfect meal. —Mv17429

2013-05-30 23:01:00   The customer service is awful. I was told 20 min before closing that they were no longer accepting new orders. Guess she had something more important to do then her job. She did however let me know they would be open tomorrow at 11. Great... Will not be eating here again —PhillipLiems

2013-11-12 20:43:35   Best Pizza Place ever! First of all it is clean. Second is the service. I love that it is operated by a family: husband, wife and 3 of their sons. They are always friendly to customers, very helpful and ready to do good deals. Every time I order something or stop by to pick up my order, I feel like they really appreciate their customers and take care of their business. Prices are pretty cheap plus there are always lots of deals. Thank you Pizza Guys Davis for the best Pizza Place!!!!!!!!!!! —MichelleVee

2014-07-24 21:23:36   Consistently great pizza. I have had better for sure, but this place is my go to place in Davis. You even get surprised with an exceptional pizza every now and then. —JakeDuCharme