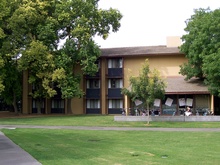 Rienda Hall in the Summer.

Rienda is a three story building located in Regan and is nearly identical to Nova, but houses no themed program. She is located north of Regan Main, across Regan Green, and to the west of Nova.

Contrary to the floorplans found on the housing Web sites and in their own paper records, the men's restroom is now located on the second floor, with women's restrooms on the third and first. The building contains mostly doubles, with a single occupancy room on each floor (two of which are occupied by RAs - first and third) and two quads on each floor.

Residents of this dorm should refrain from using the bike parking area to the west of the building, as it has a recurring bike theft problem.

Their mascot has historically been The Goat.

Rienda and Campo Halls in the winter months. Beloved Rienda's delayed remodeling finally began to proceed in the summer of '06, although workers had began tearing up a room in it a quarter earlier.

In 2005-2006, Rienda was used to house many people unhappy in their original dorms. Everyone who lived there were originally suposed to live elsewhere. Rienda herself was going to lie vacant for a year, so that she could be remodeled at that time. After the asbestos issues with the new Tercero DC came to light, Rienda and Campo (another one scheduled to be remodeled) were thrown into active service in case a mass emigration from Tercero occured. In fact, the number of émigrés from Tercero was not overwhelming, so that even off campus students were able to join her, and a number of vacancies endured all year.

During Fall '05 its poor residents were stripped of AIM for days at a time, about once per fortnight, due to some combination of DNS problems and the traffic shaper putting AIM at the same priority as P2P apps. Residents also had problems with the AC units back in the summer of '02 when we got a massive 2 week long heat wave. 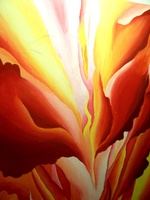 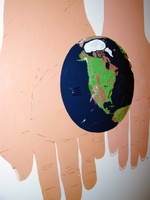 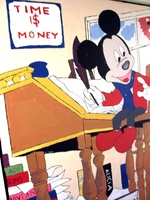 Across from 209 on the second floor. Residents of 209 A/B typically claim the mural as their own and Sharpie their names on the books in the mural 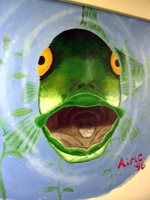