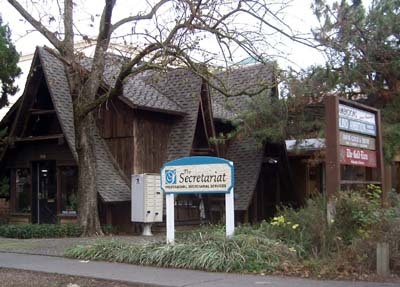 The Secretariat is a secretarial service specializing in:

It was established in 1973 by Laura Goodman, who ran the service for more than 20 years, until she sold the business and moved to an apple farm in Oregon. It is now owned and operated by Janet Gift, a graduate of California State University, Fresno, and resident of Davis since 1975.

In the 19th century, this site was the location of one of two very large scales that weighed wagons bearing grain. After the weighing process, the product was then shipped out via the nearby railroad. According to John Lofland in Davis: Radical Changes, Deep Constants, there is a legend which states that the current structure was simply built on top of the still-existing scale. The other scale was in the location where Hibbert Lumber now stands.