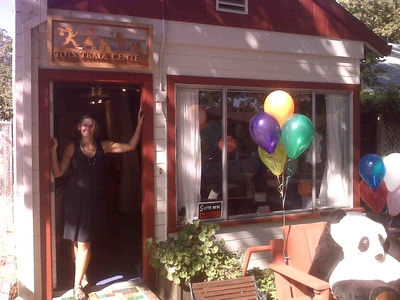 Bring your babies and kids....Come in and Play!!

Tots Trade Center was a store that sold gently used and recycled children's items. The quaint little space that Tots Trade Center occupied was filled with a wide assortment of unique baby and kids items, toys, furniture, and other gently-used items, including costumes, some clothing and shoes. Items were purchased outright from customers for cash or store credit. Consignment was also an option. New items were received on a daily basis so the inventory was constantly changing. "Tiny" sat outside the store and waved to customers from his big red bench. Customers looking for a particular item could stop in or give the owners a call and they would add the item to the customer's "Wish List".

Tot's Trade Center was first established in 1985. Kelly van Boxtel, who ran the store for 4 years, was pregnant with her daughter McKella when she bought it in 2001. She closed the store in 2005. That same year "Just Kidding" was opened. In October 2010, Kelly and her husband Dave opened their office for Kelly's Environmental Consulting business in an adorable space at 515 G street. The space was too large for just a small office. Dave suggested they get back into the "baby" business....so Tots Trade Center was reopened (across from Hibbert Lumber). You could often find McKella behind the check-out counter eager to help the customers. The store was marked by the beautiful hand-carved wooden Tots Trade Center sign above the door made by local artist Jesse Pruet, a.k.a "NEMO". 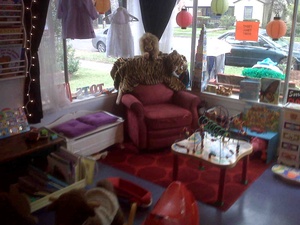 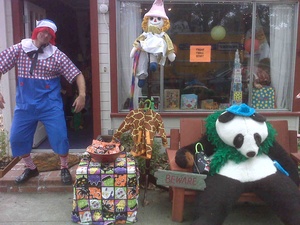 2011-07-14 12:30:42   Kelly is great, always willing to look at what you have to consign, and she has terrific deals, especially on costumes (which are always in high demand at our house). —shannahw

2011-09-03 14:33:02   I went by yesterday and the signs were gone and the store was nearly empty except for some bookcases and a few odds and ends. Is Tots Trade remodeling or closing? This is SUCH a good store—I hope it's not gone. —EvaG

2011-09-03 21:38:35   They are now closed completely, and have their location up for lease on CL. I talked to the owners and they said they didn't have time for the business anymore. —Aaron.Curtin