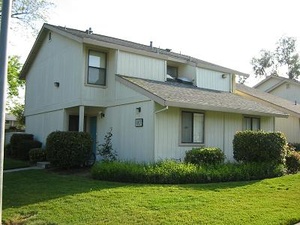 Triebhaus Apartments is an apartment and townhouse complex on Adams Street. Townhouses are really nice, and go for around $1500.00/month.

Triebhaus buildings are actually individually owned and managed (much like condominiums), though the Triebhaus Homeowner's Association does oversee major issues. The current owners/members are Ralph Hwang, Steve Hoffman, Joe Hom, and Rita Seiber.

I may not have any background in the study of the German language, but I could swear that the name is spelled wrong on their sign. Treibhaus in German means "hothouse", like a place to grow plants. 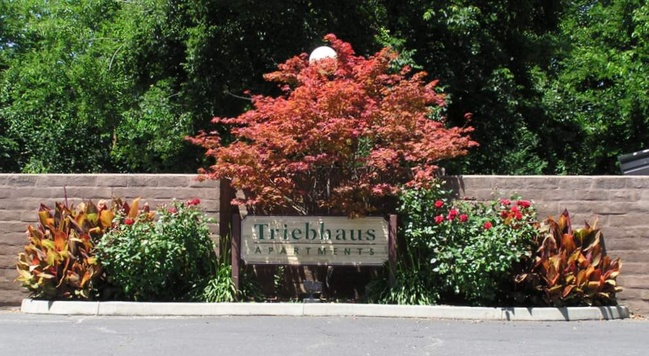 2008-04-02 22:32:12   Apartment rules vary because they are owned by different people. Like, a strip of houses that are connected together can be owned by the same landlord whilre another strip is owned by another. I'm in the apt. that's to the right side of the entrance sign (the pic) and they do not allow any pets. The rent right now is pretty cheap: 1400/mo. My unit includes our own dryer/washing machine. It's 3BR and 2 full bath. And our water is free. The landlords are very nice too. —Aarolye

2008-06-09 18:04:36   I'm renting here currently, 3br/2ba for 1650$/mo. I know there's one townhouse not connected to my building that has a very annoyingly yappy dog (that I've never seen) in its yard, and there are a number of mostly nice neighborhood cats in the area that sometimes visit my residence. Although management is good in the sense that they are very responsive and try to address problems quickly, I would say they are even TOO quick and overzealous (I can count on both hands the number of times my household has been practically barged in on by UNANNOUNCED visits). —AmyChow

2008-07-06 12:51:53   yzheng— Each three plex building is owned by different people. So right next door you can have a different owner, different rules. When we lived there several people had dogs. One older lady owns a bunch of them. I saw dogs in her units. —LouisM

2008-07-06 12:55:27   AmyChow: "Barged in, unannounced visits..." You must mean Joe Hom. Short balding older Asian guy? He owns one of the buildings and keeps up the grounds and does maintenance for the other owners for a fee. Abrupt would be an accurate adjective. He is there like one day a week and he is going to get it done now... barge in! —LouisM

2008-08-09 11:03:57   I lived here sophomore, junior, and senior years. Rita is an excellent landlord and she knows her stuff. For the square footage, location, and maintenance you receive, prices are very reasonable. I truly miss living here!! —AliPezeshkpour

2009-03-20 22:34:51   DO NOT, I REPEAT DO NOT LIVE AT TRIEBHAUS!!! I lived here for a year and, at first, Raplh Hwang seems nice enough, but when something goes wrong, his conniving side shows through. Coincidentally, my current manager at work was one of his tenants and she fully agrees that he is absolutely shady. Also, the tenant who lived in my unit prior to my living at Triebhaus, warned me that Ralph Hwang was a "difficult person." What happened at my apartment also happened to my neighbor in the same complex within 2 weeks: The washing machine flooded our upstairs level and subsequently leaked through the ceiling of our downstairs level and caused significant damage. The handy man at the time informed me that all the washers and driers were all purchased from another complex which was getting rid of them (they were old and used machines!). The handy man also informed me that he had just finished dealing with the same problem at my neighbor's place. The worse part was not the flooding. The worse part was that Ralph accused my roommates and I of damaging the machine and that we would have to pay $2000 dollars for the clean-up and $80 for calling his handy man!!! I threatened to talk to a lawyer before agreeing to anything and he quickly changed his mind. Then, unbelievably, after the washing machine repair man told us that the machine was fixed, the same flooding occurred as soon as I washed a load of laundry. As expected, Ralph tried to force us to pay for the clean up and then I threatened to talk to a lawyer and, again, he backed off. In the end though, he kept nearly all of our deposit, sending me a check for $134 out of $1500. But that's not the end... he later put a stop-payment on the check, and sent me a letter, saying that the $134 was actually the amount that we owed him for damages (which I refused to pay!). So, he kept all of the deposit. NEVER EVER LIVE HERE OR RENT FROM RALPH WHANG!!!

2010-01-23 16:04:30   Can any UC Davis students tell me how long it takes to bike from these apartments to campus? Also, are there any convenient bus lines that run nearby? Lastly, are there any stores or plazas that are within easy walking distance? Thanks so much! —MannieR

2011-09-16 23:06:46   We lived in some condos located next to this complex. After a couple of years, the property was purchased by Ralph Hwang, who owns Triebhaus too, apparently. Fair warning to anyone signing a lease with this guy; he's a total shiester. We rented the condo there for 5 years and never had a single negative incident with Ralph. We always paid up on time, and he, in turn, gave us first priority to renew the lease on a yearly basis. After building a rapport with him for literally years, the time came for us to move. That's when it all went south. We cleaned the apartment thoroughly. A week before we were officially done with the lease, we had to pack up and hit the road for our big move. Since we were still technically tenants for that last week, we had asked our brother in law and his wife to go back into the unit and do one last thorough cleaning. This was made clear to Ralph in writing, and he said that he understood. The next day, we left with the Uhaul, and Ralph changed the locks. Our family could not get into the unit to do anything at that point. Still, the place was in great condition (as described by Ralph himself, who had done a walk through with an inspector the day before), so we weren't concerned.

A week later, I receive a 'bill' via email. It was basically a non-itemized (illegal) bill that claimed we owed him $1400 dollars BEYOND our security deposit. When I asked him about the cost, he said, in writing, that it was to repair "normal wear and tear". I informed him that unless the list was itemized, it wasn't going to be considered legal. He responded with an itemized list. Every last point on the list was very much normal wear and tear... things like replacing the carpets throughout (manditory after 5 years in the state of CA at no cost to tenants), repairs to the outdoor AC unit, etc. At that point, he also threatened to sue me in order to get his money. I responded with the exact state rental codes that specifically stated how his proposed fixes were not the responsibility of his tenant, but his responsibility alone. He then immediately went silent... no contact, and I've never heard from him since.

Bottom line, after years of good rapport, he still tried to rip us off while blatantly ignoring the illegality of his claims. The fact that he makes it practice to prey on his tenants is deplorable. Don't rent from him, you'll regret it —VicM

2015-07-17 09:48:48   dannyboy I created an account here specifically comment about your remarks here. I am Ralph's handyman. What you said about my telling you Ralph purchasing used appliances is blatant lie. Here is my phone, would love to talk to you in person. 916 430 2087 —dw

2018-10-03 11:21:14   Rita is an awful landlord. We got the place in pretty poor condition a year ago. It hadn't been professionally cleaned. There was a computer monitor left in the apartment and a bed frame, light fixture and blinds left in the backyard. We went over these things with her to make sure we wouldn't be charged for this when we moved out. When we got the place the air conditioning didn't work. We went back and forth for a full month before she finally sent someone out to fix it. She would set up a time for her or her handyman to come by the place without giving us 24 hours notice. She didn't cash our October or November rent check until the following month and then accused us of not paying rent that month. Overall very unorganized. We cleaned the place thoroughly before moving out. During the walk through she said the only thing left to be done by the cleaners was wash the windows and window sills but we were still charged $500 for a total of 20 hours of cleaning. And, of course, she ended up charging us for the bed frame that was left in the backyard and a sink that was not there when we moved out (where would we have gotten a spare sink in the first place?). After trying to contact her for the last two weeks to dispute the charge taken out of our deposit we've gotten no response. I strongly advise that you keep a record of all of your correspondence with her and take lots of pictures of the place when you move in and out so you can take her to small claims court if she tries to screw you over in the way she has so many other tenants. Here are some resources to help you out with the process in case it does come up: Office of Tenant Resources ([email protected]) Fair Housing guidelines on what can and cannot be deducted from security deposits https://cityofdavis.org/Home/ShowDocument?id=2602 GSA free legal advice has been very, very helpful: https://gsa.ucdavis.edu/resources/legal-services/ Good luck! —eazepeda