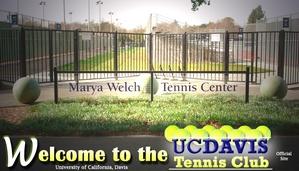 Not to be confused with the UC Davis Table Tennis Club.

The UC Davis Tennis Club is a tennis-oriented networking club where people from all skill levels can practice, meet other players, participate in social events, and play in Club tournaments.

If you want to learn more about the club or if you are interested in joining, visit their website.

Tennis on Campus Club of the Year

The USTA Tennis On Campus Club of the Year Award honors a Tennis On Campus club for significant improvements in their program and how it commits time and resources to benefit its community. This year’s winner, UC Davis, is a close-knit, 90% self-financed, and diverse club of over 250 recreational and competitive players whose goal is to spread the joys of tennis through volunteering and mentoring. For its impact on the Davis community at large, the UC Davis Club holds a number of charitable events per year and has strong partnerships with local businesses. For example, the club partners with the USTA to provide a free clinic to over 400 underprivileged kids every year. In addition, the team offers a membership card which allows for discounts at local Davis merchandisers. The UC Davis Club Team was honored earlier this year at the USTA Northern California Heroes Banquet as the 2008 Outstanding Tennis on Campus Program.

“It is remarkable to see how many of these student-led programs commit their time, energy and resources to improving their local communities,” said Glenn Arrington, USTA Tennis On Campus National Program Manager. “It was a very difficult decision because so many of our teams are great ambassadors not just for tennis, but also their campuses. In the end, the team from University of California, Davis stood out from the crowd, and they should be proud of their achievements.”

The USTA Tennis On Campus program will present the University of California, Davis the Club of the Year award during the 2009 USTA National Campus Championship , to be held April 16-18, 2009 at the award-winning Surprise Tennis & Racquet Complex in Surprise, Arizona. The UC Davis team will be competing along with other Northen California teams, UC Berkeley, Stanford and Cal Poly. (source: http://www.norcal.usta.com/sitecore/content/NorCal/Global/News/Collegiate/UC%20Davis%20Named%20Campus%20Team%20of%20the%20Year.aspx)