Our Western Scrub Jay Aphelocoma californica, is sometimes mistakenly called a "Blue Jay". While it is blue and it is a jay, the name "Blue Jay" refers to an Eastern American bird that never gets out to the Pacific Ocean. (Actually, one did arrive in the Bay Area a couple years ago and, when its presence was noted on the Rare Bird Alert, birders from all over California swarmed to see it.)

These birds can be seen all throughout residential Davis, but in fewer numbers than the crows. Crows, jays, and magpies are the three members of the 'corvid' family that live in Davis. In the hills above Winters, we also have Stellar Jays and Common Ravens.

Scrub jays regularly bury nuts in the dirt or under a pile of leaves. Watch closely — when they're done burying, they'll carefully mark the spot with a leaf or twig so that they can find it later. Although their native food is acorns from our Valley Oak trees, scrub jays also love peanuts in the shell. (If you decide to feed them, only offer roasted, unsalted peanuts — salt is bad for them and raw peanuts will sprout when they're buried. Placing a handful of peanuts in the same place every day guarantees loyalty in a scrub jay, and they can soon be trained to take peanuts from the palm of your hand.)

If you want to feed our smaller winter birds without the Scrub Jays hogging all the food, put out smaller seed (such as chopped sunflower meats) instead of larger nuts (such as peanuts). Croutons or bread are not usually good to feed, as any that is not immediately eaten will quickly get moldy and become toxic (1 'moldy bread can cause aspergillosis, a fatal lung infection'). 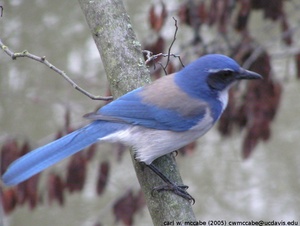 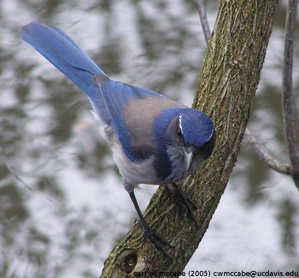 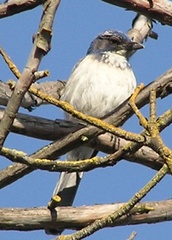 Scrub Jay from below hides most of its blueness 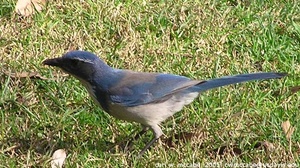 "I believe they are made out of pure evil. Watch one for a few minutes - you'll see." -ChristopherMcKenzie

2008-03-16 10:01:24   For those of you who live in residential homes I strongly suggest that you don't feed the scrub jays that hang out in your backyard. As a kid growing up in the subs of the bay area there was a huge scrub jay population in my neighborhood. A lot of them would hang out in my parent's backyard foraging for food. My lovely mother thought it would be fun to feed them the leftover stale bread and cereal (why she didn't make croutons is beyond me) and after awhile, they became used to a 10 a.m. feeding routine. When we stopped feeding them they would stand outside for hours on end, SCREECHING at us for food. Eventually, after a couple of MONTHS of not feeding them, they stopped bothering us. —EmilyTung

2010-07-16 00:26:55   I used to feed the jays peanuts on my balcony. I started to notice one of these little rascals would hang around near the bike rack of my apartment building in the evening. After I parked my bike, he would follow along, watching to see which apartment I entered. After I went inside, I'd see him perched on my balcony railing (on the opposite side of the building), looking into the apartment, waiting for me to come out and put peanuts into the feeder! He wouldn't fly away when I came out onto the balcony, but I could never get him to take a peanut from my hand. —DukeMcAdow

2010-07-16 07:08:07   When I was growing up, in Livermore, one of the neighborhood scrub jays was really friendly. When we were out working in the yard or reading on the patio, the jay would land on a branch nearby and just hang out, occasionally warbling a bit (very, very different from their squawk). Some mornings, it would flit along from tree to tree, following me around the corner and through the park to my elementary school. A couple of times, it even found me as I was leaving my school and followed me back home. It was almost like having another pet! —TomGarberson