This should be the Wiki's choice drink.

The Wicki Wacky Woo (as it is spelled at Bar Bernardo) came on the scene in the late nineties, after a UCD Super Senior (with the last name, "Nowicki") decided to extend her superness and work many many hours at Bar Bernardo which is part of Cafe Bernardo. After several months of trying to figure out a way to give her friends the most alcohol, with the best taste, for the least cost, she came upon the now infamous WickiWackyWoo. Now the subtlely powerful drink is a rite of passage for Davisites and those turning 21. There was a long-running rumor that one could only be served two Wikis at a time, however, this has been disproven through several tests.

The first Wiki Wacky Woo in Davis was not made at Bar Bernardo’s. It was not developed by a super senior named “Nowicki” after months of trial and error. It was actually made at Dempsey’s bar/restaurant on E St around the block from where Bar Bernardo’s eventually would be.  But the original recipe itself comes from Mr.Boston’s Official Bartending Guide. (The name “Wiki Waki Woo” actually comes from an American jazz song from the late 1920’s called “Nagasaki”)

One slow afternoon, the rookie day bartender at Dempsey’s, out of boredom, decided to practice drink making with his friend, another fellow bartender there. They pulled out Mr. Boston’s Official Bartending Guide and flipped quickly through it, and whichever page they landed on, they’d make the drink they put their finger on.  It just happened to be the Wiki.

It tasted like Hawaiian Punch with a kick, so, as it is a college town, the day bartender immediately added it to his repetoire, and eventually brought it with him to Bar Bernardo’s when that place opened.  To add a little more kick to the already potent drink, he decided to pour the shot of Bacardi 151 into the straw instead of leaving it as a float, as the recipe suggested. That’s the only real innovation that could be attributed to the Davis incarnation of the drink.  That, and the rules, of course. Rule 1:  First drink comes straight out of the straw.  You don’t mix it up or stir it in any way, you just take it. If you don’t, then you are shamed in front of your friends and as punishment, the bartender pours you a shot of their choice. (It was the nineties)  Rule 2: Three and Out. After three Wikis, you can have a water, but you’re not getting anything else. (You just chugged 9 ounces of booze— including a full shot of Bacardi 151–masked by sweet fruit juices. You’re fine.)

The reason for it’s popularity in those early years could be traced back to the first year law students at King Hall, who used to spend their Friday afternoons at Bernardo’s after class. The day bartender introduced them to the Wiki, they told their friends, and the rest is history.

I can attest to this all being true, because I was, in fact, that day bartender. Myself, along with Dianna Matthews (also from Dempsey’s) who worked the night shift together started the Wiki craze in Davis in the late nineties.  Attending Picnic Day last year (2018), I and my wife happened to stop by Bar Bernardo’s. I was shocked to realize that it had been 21 years since those early days.  A full person of legal drinking age since!! I was also surprised and admittedly somewhat proud to see that it’s popularity hasn’t waned, and that they now sell Wiki Wacky Woo t-shirts!

(Incidentally, the first person to drink a Wiki in Davis is now the owner and operator of The G Street Wunderbar) 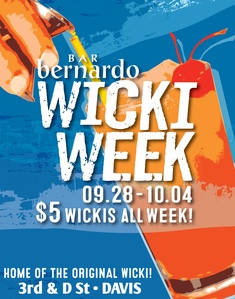 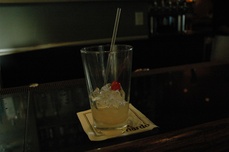 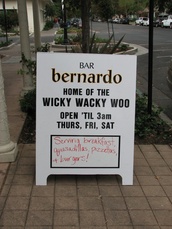 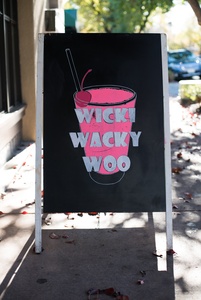 The Wicki is essentially a shot of 151 with a modified long island chaser. It contains a total of 4oz of alcohol for $8. (during the school year the “Wicki Wednesday” special begins after 9pm and they are $7) the average price for a well drink is $3 and at most places is an ounce, so if you were to drink the equivalent in vodka crans for example it would cost you $12. 3 is the limit… people rarely make it that far.

From BarNoneDrinks.com, the Wiki Waki Woo (pronounced the same):

Combine all ingredients with ice and pour into a hurricane or parfait glass. Garnish with an orange slice and a cherry.

From Mixed-Drink.com, the Waikiki Woo Woo, the same idea by another name:

Combine all ingredients with ice and pour into a hurricane glass. Top with a pineapple ring, slice of orange, and cherry speared on a paper umbrella.

The 1928 jazz song Nagasaki ends each verse in a jubilant "Wiki Wacky Woo."

An unnamed person drank 1.5 servings of the WWW and invariably ran into his dwelling naked smelling of strong alcohol and holding a rose in between his teeth. -Jenn

I will never drink one of these. It looks like a suicide in all the wrong ways. - RobRoy

Amaretto is not for mixing! No matter how outrageous the drink or purpose. - BrandonKeene

I've only had the drink a few times (at Bernardo), but it does seem like they've been weaker lately. Not a high enough booze/$$ ratio. I've never liked the taste anyway. Sickeningly sweet. The traditional way to counter the taste is to just drink it all in one shot, which actually isn't that hard with the amount of ice they use these days. - CaptainRush

Back in my day, they filled the straw with 151, for an added kick. - DeniseVardakas

2006-08-23 16:01:56   I have experienced the wonderfullness of the Wiki on many an occasion, often opting for the limit of 3 wikis. I can safely say that this is a bad idea. On Wiki flavoring, it depends on the bartender. If one is looking for a Wiki of acceptable taste, go on Thursday or Saturday and talk to Adel. On Friday nights, Tom will make you a Wiki that is exceptionally strong, but tastes of bad booze. —RussellAnderson