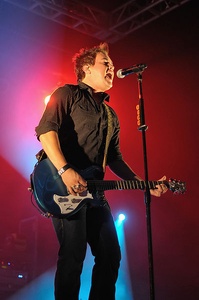 Eli Young Band is an American country music band based in Denton, Texas. The band is composed of Mike Eli (vocals, guitar), James Young (guitar), Jon Jones (bass guitar), and Chris Thompson (drums). The band released its self-titled debut album in 2002, followed by their Carnival records release Level in 2005. The band's third album, Jet Black & Jealous, was released in 2008 by Universal South Records, and has accounted for three Top 40 singles on the Billboard country singles charts.

The band was formed by James Young and Mike Eli as an acoustic duo (Eli & Young) when they attended the University of North Texas. After Chris Thompson and Jon Jones joined the band, they dropped the ampersand and became Eli Young Band. They released their 2005 debut Level on Carnival Records and opened shows for Miranda Lambert. National exposure on CMT and GAC helped the Eli Young Band begin to build a following well outside of their touring base. They have sold as many as 2,000 tickets a night in multiple markets. In late 2006 the band released Eli Young Band Live At the Jolly Fox located in Huntsville, Texas. After signing a booking deal with Monterey Peninsula Artists Paradigm last fall, the band has continued expanding their reach on the road.

Early in 2007, the Eli Young Band signed a management deal with George Couri and C3 Management. Their plans included a rigorous tour schedule and key opening spots with Pat Green, Robert Earl Keen and Jack Ingram, as well as a spot on the 2007 Austin City Limits Music Festival.

While touring, the band was also making songwriting a top priority and made time for writing trips and retreats at the Young family ranch. Energized with new songs, the band was ready to begin working on a new album in late 2007. Working with producers Frank Liddell and Mike Wrucke (who have also produced for Lambert), the band took time off from touring to record at Omni Studios in Nashville. Their third album, Jet Black & Jealous, was released in 2008. Its lead-off single, "When It Rains", spent thirty-seven weeks on the country charts and peaked at #34. A second chart single, "Always the Love Songs" (co-written by David Lee Murphy and George Ducas), followed later in the same year, reaching a peak of #11.

The band appeared as part of the pregame ceremonies for a NFL game between the Denver Broncos and Kansas City Chiefs at Arrowhead Stadium in Kansas City, Missouri on December 5, 2010. While singing, Mike Eli forgot the words to "The Star-Spangled Banner" and was promptly booed by fans in attendance. He attempted to sing the song again, but forgot a considerable amount of the lyrics in his second try.