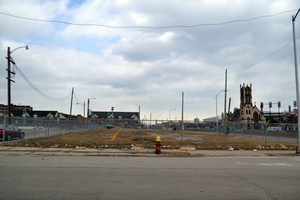 The lot where the Donovan Building one stood. Taken from Park St facing Woodward Ave. Taken by Caitlin Donnelly 2014

.The Donovan Building, located at 2457 Woodward Avenue, stood at the corner of Woodward and the Fisher Freeway in Detroit until it was demolished in 2006 to make additional space available for Super Bowl parking. The building was best known as the headquarters for Motown Records between 1968 and 1972.

The Donovan Building was a ten story structure designed in 1922 by architect Albert Kahn. It opened in 1923 with shops along the ground level and offices in the 9 stories above1. In 1968, Berry Gordy, Jr. purchased the building to serve as offices and studios for Motown Records. Until Motown occupied this office building, staff and musicians had worked out of a group of  houses on Grand Boulevard, where Hitsville USA and the Motown Museum are still located2.

The Donovan building was conveniently located only 100 yards from the Fox Theatre and other downtown performance venues frequented by Motown's artists. Many of the musicians and singers felt that the new studios building were cold and unpersonable compared to W. Grand Boulevard houses3.

In 1972 Gordy, Jr. relocated Motown Records to California, leaving the Donovan building at 2457 Woodward Avenue vacant4. In 2003, the owners of the former Detroit Headquarters of Motown Music announced a $28 million redevelopment plan for the building. A Motown museum was planned for the lower floors and the upper floors were to be converted in lofts and apartments5. The plan never moved forward and the building was left unoccupied.

In 2006, Detroit Mayor Kwame Kilpatrick declared the building to be an eyesore. The owners of the Donovan Building, Cherrylawn Realty, agreed and financed the demolition. Within two weeks, both the Donovan Building and the nearby Sanders Building had been demolished. Since the demolition moved forward so quickly, there was no time to clear items like marble, sculptures, documents and other things that are usually salvaged from such historically significant properties. Paper and other debris floated in the air as the building was demolished. In February of 2006 the lot where the Donovan Building once stood was used for parking during the Super Bowl.

The Donovan building's connection with Motown made it one of the most memorable buildings in Detroit. Historians, archaeologists, music fans and others had initially rejoiced at the news that such a significant building was to become home to a museum telling the story of Motown music. Today, these communities are still disappointed that the building was demolished so quickly, and with such disregard, leaving little time to recover irreplaceable Motown-related artifacts and correspondences that allegedly remained inside the building.

4. From the Detroit Free Press

See the Youtube video for this site here, part of the "Making Music in Detroit" project