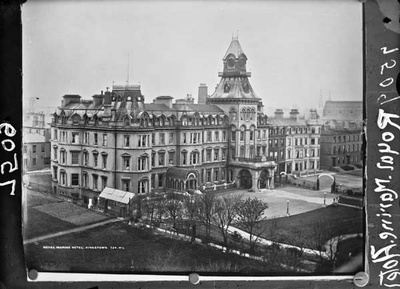 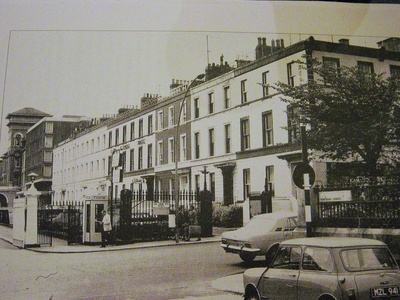 Most of Gresham Terrace no longer exists - the site is now occupied by the car park of Dun Laoghaire Shopping Centre.  The Royal Marine Hotel (left, before 1900)  occupies a prominent position at the end of the location.

The terrace existed from c.1834 but was extended in 1863 when Laois-born engineer, entrepreneur and patron of the arts William Dargan, purchased the establishment, previously known as Hayes’ Royal Hotel. According to a House of Commons Accounts report, Dargan formed “The Royal Marine Hotel Company of Kingstown” and paid £50,000 for the building. He spent another £25,000 (approximately two million pounds in present day figures) on extending it to designs by John McCurdy and engaged prominent Dublin contractor Michael Meade to carry out the work. The southern end of Gresham Terrace adjoins Adelaide Street where plans to add a tower and spire and extend the chancel of of Mariner’s Church were being mooted at the time the Royal Marine Hotel was under construction. The building is now home to the National Maritime Museum. Turning to their right the women could see the Town Hall, which was under construction between 1874 and 1880 to the designs of a local architect, J. L Robinson. (Meade was also the contractor for this building.) (Source:- http://building19thcenturyireland.wordpress.com/tag/dun-laoghaire/)