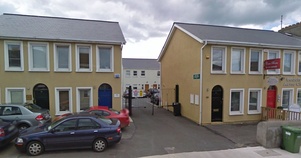 The name of Rogan's Court has been revived in the location of the original Rogan's court on Patrick Street.  It is a reminder of the infamous courts of Dun Laoghaire.

The courts were very inferior housing for the lower classes in society.  Kingstown/Dun Laoghaire had developed very rapidly as the harbour developed, and the development of the railway brought further prosperity - but the prosperity was not well distributed. Extreme wealth lived alongside extreme poverty with each in very close proximity to each other.  Typically, the very fine houses along the main streets were occupied by the wealthy merchants and traders - but in the backyards of those houses they had huts, sheds, and other hovels where the poor and poverty-stricken lived.  These were the courts.  In the first decade of the 20th century there was a concerted effort to clear out the courts and to house the occupants in clean, dry, well-built accommodation, and this led to the construction of many of the red-brick schemes of public housing around the town.

In the 1901 census, Rogan's Court is listed as 8 x 1-room dwellings, classified as 3rd class

In the 1911 census, it has 3 x 2-room dwellings, classified as second class.  It seems likely that some occupants moved out and the rooms were re-allocated

A recent development called Rogan's Court is currently on the site.  It includes the constituency offices of the Ceann Comhairle of The Dáil (speaker of the Irish Parliament), Seán Barrett, T.D.