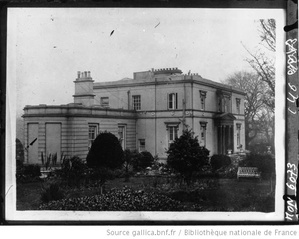 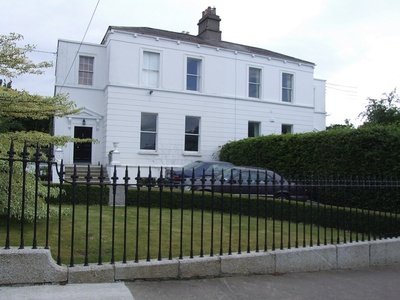 Have a look for a benchmark just below the railings, next time you visit Sloperton Sloperton joins The Slopes to the main Dublin/Dun Laoghaire road at Longford Place, skirting the private gardens DeVesci Gardens, parts of which are rather overgrown.

Maps dated 1860 show two houses in this area, Sloperton and Gortleitragh.  The road is shown as dotted lines, suggesting that it was a private pathway.  All of the land around is laid out as ornamental park or rectangular plots.

Little has changed by 1870, except that the road is now more clearly defined by continuous lines

By 1908, Sloperton house seems to have been divided, and additionally, a house called Sloperton Lodge has been added.

Gortleitragh was the infamous house of Dr Hempel, the German Ambassador during WW2, the place where De Valera expressed his condolences on the death of Hitler.

Earlier, it was the house of Donald Buckley, Governor General of Ireland

Another interesting story in relation to the same house in a site about Chinese history - the story is more detailed on Wikipedia (See Evan George Stewart)
Colonel Evan George Stewart  DSO, OBE, ED, MA (1892–1958) was a British soldier and missionary to China. He was born on 27 March 1892 in Bedford, the seventh child of the Rev Robert Warren Stewart MA and Louisa (née Smyly), both CMS missionaries in China who were then on home leave. Stewart went with his parents to their mission station in Kucheng, Fukien Province, East China, in 1893 and was with them in 1895 at a nearby hill station called Hwa-sang when they were attacked by an insurgent group, the so-called "Vegetarians", who were opposed to all foreigners, particularly missionaries. His parents were killed as were one of his brothers, Herbert (aged 6), and one of his sisters, Hilda (aged 1), and their nursemaid. Evan survived, although it is said that he was hit on the head by a rifle butt, and was rescued from the then burning house by his sister Kathleen (aged 11), who also rescued their sister Mildred (aged 13) whose leg had been slashed by a sword. His elder brothers, Arthur, Philips and James, were at school in England. The surviving children were taken to Dublin to their grandfather's large house, Gortleitragh, in Kingstown (renamed Dun Laoghaire in 1922), where Evan, with his brother and sisters, were brought up by their uncles and aunts. Later they were looked after by their Aunt Emily ("Tem") at her home, Brighton Lodge, in nearby Monkstown. Educated in Dublin and then as a boarder at Wellington College where he shone at Mathematics, History and in Athletics winning the English Public Schools 100 yds sprint.