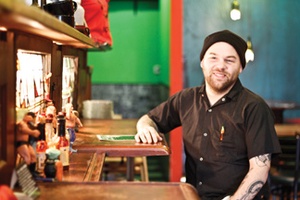 In his own words from a 2011 interview with Criminal Behavior (Detroit):