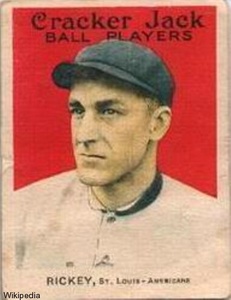 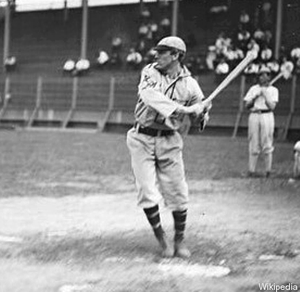 Branch Rickey was a major league baseball player who became an innovative baseball executive; he was elected to the Baseball Hall of Fame in 1967. He was known for breaking major league baseball's color barrier by signing African American player Jackie Robinson, for drafting the first Hispanic superstar, Roberto Clemente, for creating the framework for the modern minor league farm system, for encouraging the Major Leagues to add new teams through his involvement in the proposed Continental League, and for introducing the batting helmet. He famously promised his mother he would not play baseball or attend a game on a Sunday, a promise he kept, although he later invented the Sunday double-header.

He served in World War I with Christy Mathewson in the Chemical Warfare Service. He spent the winter of 1908-'09 in Saranac Lake, successfully curing incipient tuberculosis. 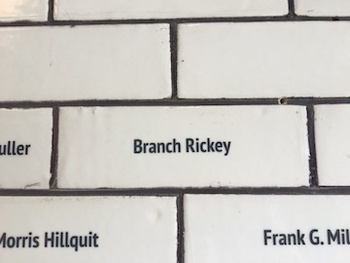 How many in Saranac Lake know that Branch Rickey, great baseball executive, took the cure for tuberculosis at Trudeau Sanatorium?

A new book has just been published about the man who built up the great St. Louis Cardinal teams of the twenties and thirties and the championship Brooklyn Dodger teams, and who introduced the Negro ballplayer to big league baseball.

Branch Rickey played his last game of big league baseball Friday, September 13th, 1907, quitting when his arm gave out. He was a pitcher for the New York Highlanders. For much of the following year he studied law, campaigned for the Prohibitionist ticket, and coached baseball.  He became over-tired and sick.  He had TB.  Let the book describe his time in Saranac Lake.

…relief. At best, you could delay the inevitable, but not for long. Branch and Jane Rickey made the sorrowful trip to Trudeau Sanatorium, at Saranac Lake, New York, plagued through the day-long ride by their thoughts. He was weak from weariness and worry over his interrupted plans and the uncertainty of ever returning. He asked himself silently, over and over, for an answer to what had happened, and why it had happened. And how bad was it?

"There followed ten of the grimmest possible days. Hope was a fickle and transient thing, often no more than a brief reflection of morning sun that scurried away when Rickey's harried mind reviewed the immediate past.

"'My physical pain,' Rickey said in recounting the experience, 'was considerably less than the mental strain, which was largely self-imposed. Determination of degree was still a major problem.  Roentgen ray equipment was [illegible]

" 'Dr. Lawrason Brawn, head of the Sanatorium at that time, was a pioneer in the field of tuberculin test .and supervised my exposure to five steps. If you failed to react on all five, you were negative. I reacted on the third, indicating incipiency, and calling for strict bedrest, stepped-up diet and no exercise until my fever had subsided. Regaining weight was the big problem. I couldn't do it. I force-fed myself — raw eggs with orange juice in the morning and again at night, if I hadn't eaten anything else. After ten days, I was still skinny, but well enough to be moved into the Jacob Schiff cottage, near the entrance gate to the grounds.

" 'It was quite a while, about August, when I was given what was known as two hour exercise. which meant walking very slowly for two hours in the morning and two in the afternoon. When I got that allowance, I was able to go to the workshop where Mr. Scholfield was in charge of what is now known as occupational therapy. I made leather wallets and. hand-tooled them. I read every available book on tuberculosis. I did some fine picture-framing. Then they made me a paid assistant to Mr. Scholfield, which helped my fast depleting finances. And I also won the croquet championship of the Sanatorium.

"Finally, he could reach Dr. Wynn's, outside the grounds, where Jane was living, and walk slowly through the wooded paths of Mt. Pisgah and plan again. Once a week he hired a spirited team and a topless phaeton from Pop Hutchens at $3.75 a day. Jane and he drove through the lush countryside, enjoyed picnic lunches and were able to laugh once more. At summer's end he left Saranac conditionally, still tethered by probations and promises of rest and check-ups."

And Branch Rickey for fifty more years has kept going, going at full blast, to become perhaps the greatest of baseball leaders.