The Circus on what would become Petrova field. 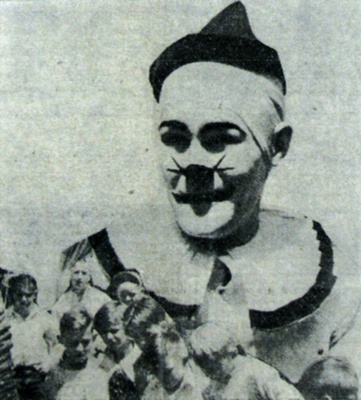 TOMORROW IS CIRCUS DAY Peanuts, pink lemonade and little boys looking for jobs carrying water to the elephants will be the vogue in Saranac Lake tomorrow, because Friday is circus day. And all the kids will be out to earn that coveted pass to the children's wonderland "The Circus." Tom Mix, himself in person, heads the vast array of performers with the big show which bears his name, and will be on hand at each performance to greet his young admirers. (Adirondack Daily Enterprise, July 30, 1936)

Adirondack Daily Enterprise, June 19, 1959 The Circus was a summer time tradition in Saranac Lake through 1968. The circus would set up on Jenkins Field (Petrova), Schroeter's Field, the "Branch lot" on Trudeau Road or at Crystal Spring Dairy.

Tomorrow may be just Friday to you, but to the majority of the citizens of Saranac Lake and vicinity, it is circus day, which means a combination of several holidays rolled into one.

The Great Tom Mix Circus, with Tom Mix and Tony in person, will arrive in this city just before daylight Friday morning, and by the time the average household is gathered at the breakfast table, will have converted the circus grounds at the Adirondack Fairgrounds, into a veritable city of white tents.

Consequently no end of youngsters will go to bed tonight with the alarm clock set for some unearthly hour and dream of a seat in the very front row, with, the prettiest of bare-back riders and aerialists blowing him kisses from the back of a galloping horse or from a trapeze swinging miles high in the air.

But the sound of the alarm clock will dispel all such startling happenings, and at the first sign of dawn there is bound to be a goodly gathering of children and grownups too, heading for the circus grounds, as almost everyone knows that the circus has grown to such enormous proportions that it is impossible to hold the old-time-street parade any more.

The unloading of the brightly-painted wagons of their burdens, the herds of elephants, camels, horses, and ponies stepping from their side-door Pullmans, and the cage after cage of wild animals getting "spotted" in the menagerie tents, promises to be a real, free show that should not be overlooked.

There will be two performances here at 2 and 8 p.m. Doors will open promptly at 1 and 7 p.m.

Many new features are being presented on the Tom Mix Circus this season. A magnificent extravaganza entitled "The Pageant Of Gold" depicting the thrill and glamour of the old west, serves as a prelude to the circus proper. Scores of people, and hundreds of animals appear in this display alone, yet this is only one of more than 200 features with this season's big show.

Among the performers to appear in the three rings are such famous names as: The Arial Daltons, featuring daring Wanda Stewart, dancing marvel of the high wire; The Flying Arbaughs with the Ward-Codona troupes, the largest and most pretentious flying act in the history of circusdom; Erma Ward, internationally proclaimed "Queen of the Air' for her daring and intrepidity. 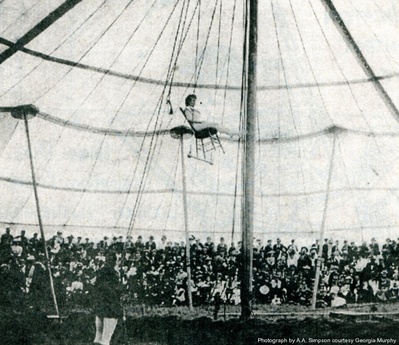 Juanita Hobson and the famous Hobson Family of Equestriennes, with the world's greatest riding clown, "Homer Hobson Jr."; Max Gruber presenting for the first time in America his jungle oddities, where natural-born enemies of the jungle perform in the same arena; The Arley Bros., defying death at the top of the huge circus tent in an aerial revelation, without the protection of a net.

Katherine Turney and her troupe of famed equestriennes; The Jordan Family of Equilibrists; The Bell Bros, and Wanda troupe of tumblers; The Famous Tom Mix high school horses, trained and presented by Tom Mix himself in person, and scores of other daring features.

A whole congress of rough riders (and ropers from the Bar T. M. (Tom Mix) Ranch, appear during the performance to present the sports and pastimes of the old west, and a veritable army of clowns headed by the one-and-only, "Jack -Knapp" supply the laughs to both young and old alike.

The Tom Mix Circus carries more than 500 performers; 150 ring-stock horses hundreds of trained wild animals and has a seating capacity of 8,000. Tom Mix and Tony positively appear and perform without any extra charge. 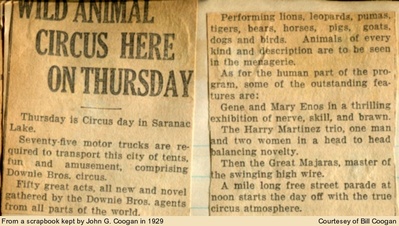 The World Bros, circus combined with the Buzz Barton Wild West coming to Saranac Lake next Tuesday, showing on the High School Athletic field is the largest popular priced circus in the world and is making its first tour of the east.

The big circus which comes from Indiana and opens its season every spring in Chicago is also bringing east the largest menagerie ever presented with a popular priced show. A big four pole menagerie tent is filled with animal cages, Goliath the largest living land animal, Essau, the giant dromedary, and Jargo the monster gorilla. There is a side show with its freaks and curiosities, but it is claimed there are none of the frequent objectionable features, a circus "big top" with seats for 10,000, three rings, an elevated platform and a large steel arena in which Capt. Walker battles with twenty lions.

The circus has for its special feature the first appearance in this country outside of New York, the sensation of two continents, Tarzan, the human ape, which was first seen last winter at the New York Roxy music hall. Tarzan is the hero of the Edgar Rice Burroughs stories and newspaper comic strips seen in the flesh for the first time outside of a few personal appearances at picture theatres.

Another special feature is the appearance of Buzz Barton, the popular juvenile western screen star, who comes direct from Hollywood bringing with him a full acting company and his favorite picture horses. He presents scenes from his latest releases and also duplicates some of the stunts that have made him the idol of the kids the world over. He is now but seventeen years of age and has made more than fifty feature pictures including the serial Wild Horses with Noah Beery.

The World Bros, circus has as the big feature of the circus, the Youseppe troupe of teeter board acrobats, Morgan's horses, Dorendo, the wizard of the wire, trained ponies, dogs, goats and even camels and elephants.

Circus Is Coming To Saranac Lake

Hey, guess what! The circus is coming to town, a really and truly three-ring affair in a tent big enough to seat 5.000.

Sponsored by the Saranac Lake Volunteer Fire Department, the King Bros, and Cristiani Combined Circus will give two performances July 16 on the Harder property on the Lake Placid road.

And that's not all—at 11 o'clock that morning there will be a real, old-fashioned circus parade with trumpeting bands and tooting calliopes. The kind you may have seen when you were a youngster and a delightful experience many a youngster in Saranac Lake has never had.

Proceeds will be used by the fire department to buy needed equipment. So draw a great big circle on your calendar around July 16.

When the Sells and Gray Three Ring Circus comes to Saranac Lake on July 19 it will be carrying on a tradition founded more than half a century ago by William Sells and Col. James H. Gray. In 1900 Mr. Sells was invited by Col. Gray to join him in forming a new circus that would be governed by the highest standards of the entertainment world. In the files of the old Greeley, Colorado, Tribune, there is a story about the first year of operation of this show. It was then a frontier "wagon" show with only ten wagons, one elephant and a limited amount of other animals, but a pleasing program of entertainment, states the press story.

Within two years the show grew into the category of a railroad circus, at first with ten cars then later upwards of fifty. At this time Mr. Sells became associated with another circus and Col. Gray carried on the Sells and Gray title alone. An outstanding showman and successful businessman, he continued the show as a railroad circus for many years.

Col. Gray was a modest and retiring man whose great concern was for the entertainment of the children. He established an "unwritten law" that his acts were to visit hospitals and orphanages whenever possible. He was the despair of his Press Agents, for he rarely made statements concerning the show. Finally in response to a request from a metropolitan newspaper, Col. Gray issued his now famous "Col. Gray's only Card to the Public." Ass this statement is the guiding principal upon which this old established circus is operated, it is presented here:

"My Circus was founded on the principal that it will present to the public only that which is clean, moral and refined entertainment. I shall never compromise with quality or divide my show into two units. My circus comes to each city complete in all its features and I welcome the public press and clergy to my grounds to witness that my bond of confidence with the people of America is not breached. " — Col. James H. Gray.

Through the years the Sells and Gray Circus has honored Col. Sells ideals. When this noted showman passed on at an advanced age the present management continued his policies. The circus abandoned the "rails" in 1949 and became a motor convoy to better take advantage of the growing network of super highways that now line all portions of the country.

When the big Sells and Gray three Ring Wild Animal Circus comes to Saranac Lake July 19, it will continue this tradition of a "Big Top". The public is cordially invited to visit the showgrounds early to watch the erection of the tents and see the many animals being fed and watered. The management realizes that "seeing is believing" and that when the public sees the size, the scope and the quality of this great show they will be back for the performance scheduled at 2 and 8 p. m. The circus will be here one day only under the auspices of Saranac Lake Volunteer Firemen who are sponsoring the local engagement of the show.

SARANAC LAKE – Clowns, jugglers, unicyclists and aerial acts are just a small part of the new and better than ever Roberts Brothers Circus coming to Saranac Lake Tuesday, July 15. Performances under the big tent at Mount Pisgah will be given at 6 p.m. and 8 p.m.

Circus tickets are presently on sale in the Saranac Lake Chamber of Commerce office. Adult tickets are priced at $2 while children, 14 and under, will be admitted for $1.

It is important to buy your tickets early to avoid an increase in the price which will be imposed on circus day.

Those wishing for advanced tickets or further information on the Roberts Brothers Circus can contact the Chamber by dialing 891-1390 or by visiting the office in the Harrietstown Town Hall.