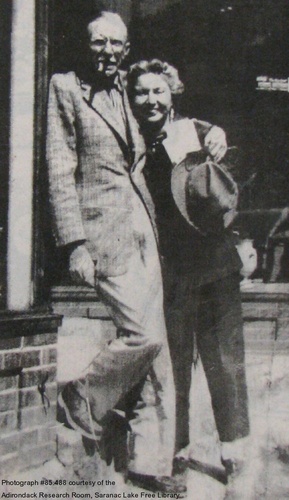 John Edward Vogt, known as Eddie, came to Saranac Lake in 1937 as a patient at the Will Rogers Memorial Hospital following a career as a stage, vaudeville and silent film actor. After his recovery, he worked in the laboratory there and in the X-ray department.

His column in the Adirondack Daily Enterprise, "Our Town", was started in the 1940s and was one of the most widely read features of the paper. In 1953, when the Enterprise conducted a poll to determine reader interest, his column came out first in all categories. The daily column was reduced to a weekly when he became unable to handle the daily work.

Eddie was always seen with his dog, Clarabelle, undetermined ancestry. Words of wisdom from Clarabelle closed most of the "Our Town" columns. 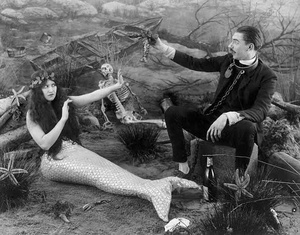 Eddie Vogt, with mermaid.  In 1917 and '18, Vogt appeared in three silent films made by an Ithaca, New York-based film company.  Photograph courtesy of  Ithaca Made Movies.Eddie was the son of John C. and Mary Trunk Vogt; he lived in Brooklyn for many years. In his career, he traveled extensively in this country and in England.

On April 22, 1997, the Adirondack Daily Enterprise published the following letter, responding to publication of the photo above:

Eddie Vogt was a former vaudevillian who came to Will Rogers Memorial Hospital to cure. Following his discharge he remained in Saranac Lake to brighten up the atmosphere. He had a monthly column in the Saranac Lake Study and Craft Guild News [of] which he was editor and a weekly column in the Adirondack Daily Enterprise titled "Our Town." 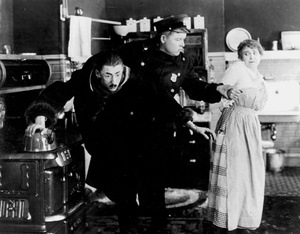 Eddie Vogt, Malcolm Head and Bessie Wharton, in Below Zero, a 1917 short film produced by Wharton Inc. in Ithaca, New York.  Photograph courtesy of  Ithaca Made MoviesIn addition to his writing, Eddie directed the annual Rotary Shows which opened the Winter Carnivals during the 50s at the Pontiac Theatre (now a village parking lot on Broadway). Brooklyn born, his background was most evident in remote broadcasts of "Dinner at Durgan's" which came over the air as "Doigan's." Durgan's, a popular nightspot, was the predecessor of Club 86. A half smoked cigar and his constant canine companion, Clarabelle, were his most prominent attachments.

Marian Brogan operated an antiques shop in the Berkeley Hotel building. The site of the picture [above] was a great hangout for many ex-patients who enjoyed the sunshine there when weather permitted.

Thank you for bringing back many happy memories from the days when we owned and operated WNBZ from studios and offices in the Berkeley. 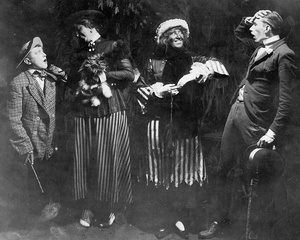 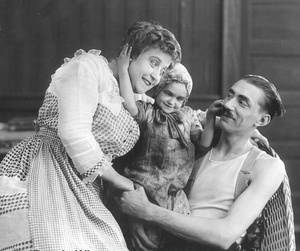 Bessie Wharton and Eddie Vogt in Below Zero, 1917. Photograph courtesy of  Ithaca Made Movies 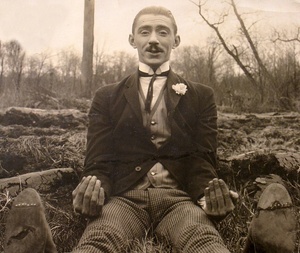 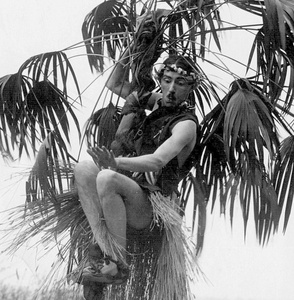 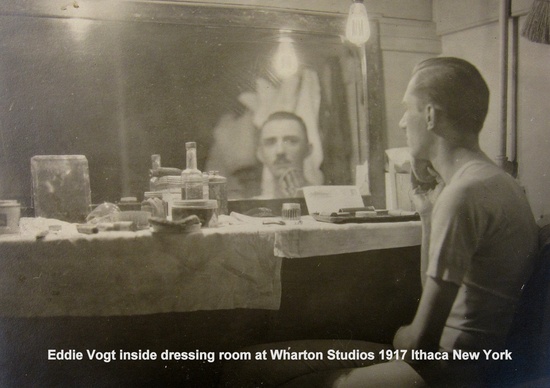 Photograph courtesy of  Ithaca Made Movies 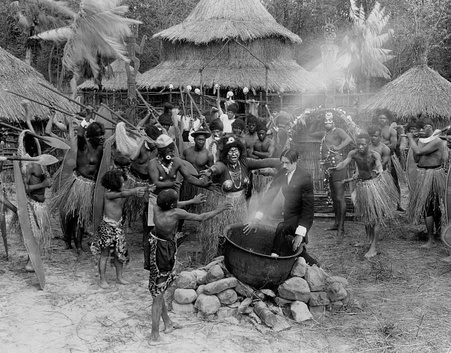 Eddie Vogt in The Missionary, a 1918 short film produced by Wharton Inc. in Ithaca, New York.  Photograph courtesy of  Ithaca Made Movies