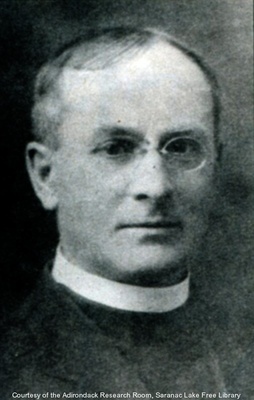 Reverend Elmer Pliny Miller was the son of Van Buren Miller; he was for twelve years the rector of the Church of St. Luke, the beloved Physician. He studied for the ministry in Middlebury, Vermont, and graduated from the Theological Seminary of New York.

From A History of the Adirondacks, Volume One - "From 1889 to 1891 he was missionary of All Saints Church at Hudson, and of Trinity Church at Claverick, N. Y. From there he went to St. Luke's Church of Catskill, N. Y., and remained there till 1912, when he moved to the far West and became Archdeacon of Eastern Oklahoma, with headquarters in Muskogee. In the autumn of 1917 he received a call from his home village to fill the pulpit of St. Luke's Church, left suddenly vacant by the death, in a tragic automobile accident, of the previous incumbent Dr. Scott Kidder. The call was accepted, and Mr. Miller after an absence of many years returned to take up his residence and life-work in the place of his birth."