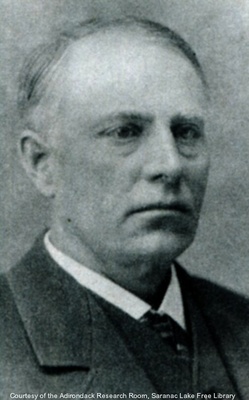 Van Buren Miller, the son of John J. Miller, was born in Wilmington, and moved to Saranac Lake in 1858, where he bought a strip of land between Main Street and the river from his uncle, Pliny H. Miller; the land included the future sites of the Harrietstown Town Hall and the Empire Hotel.

In 1852, he married Sarah Eleanor Malbone of Wilmington, with whom he had eight children; in 1856, he built a house at 24 Main Street. Two of his daughters, Helen M. Miller and Eleanor S. Miller served in and supported the old Adirondack Library; Eleanor later taught school in Summit, New Jersey. His son Seaver A. Miller served as clerk of the village and water boards. Miller's eldest son, Elmer P. Miller studied for the ministry in Middlebury, Vermont, and graduated from the Theological Seminary of New York. After posts in southern New York and in Oklahoma, he returned to Saranac Lake in 1917 to serve as minister at St. Luke's Church.

Miller was a lumberman, a farmer, and a surveyor. He served as Justice of the Peace for thirty-three years, and as the Town of Harrietstown Supervisor for fourteen terms. He also acted as a lawyer, there being none in the village at that time, and as State land agent for Essex and Franklin Counties.

He was also an advocate of better pay for teachers (his sister, Annie O. Miller, taught at the Main Street School), and secured the passage of a law applying tax revenues from wild lands to the school districts. Income from this source also allowed the building of a new school house in 1871.

He was instrumental in the building of the state road to Tupper Lake, begun in 1873, paying for its completion under an assurance that the State of New York would reimburse him; it never did— a disappointment that embittered his final years.