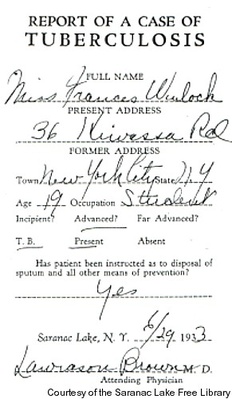 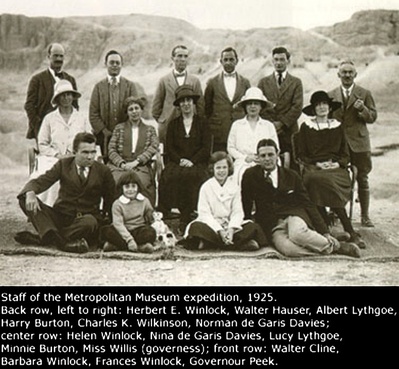 On expedition in Egypt. Herbert Winlock is on the left in the back row. His two daughters are in the front row. The elder sister is Frances. Photo credit: Metropolitan Connections by Mary Rekas

Frances Winlock had TB for about two years. She "cured" at 36 Kiwassa Road and died at Saranac Lake on or about 18 November 1935, aged 21.

Her parents were Herbert Winlock, one of America's most distinguished Egyptologists and Director of the Metropolitan Museum, and his wife Helen Chandler Winlock, of an old Boston family. They were based both in New York city and at North Haven, an island off Maine. Frances Winlock was interred at the Mount Auburn cemetery in Boston shortly after her sad and untimely death at Saranac Lake. Much of Frances' childhood was spent in Egypt on her father's digs.

Died. Frances Winlock, 21, daughter of Egyptologist Herbert Winlock whom she accompanied into the tomb of TutankhAmen; of tuberculosis, after two years' illness; in Saranac Lake,...