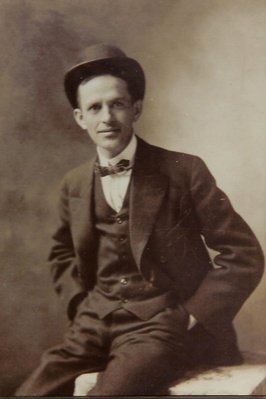 G. Jarvis Mirick came with his family to Saranac Lake from New Rochelle, New York, with T.B. and died here. He was the Circulation Manager for the New York American newspaper. In a 1983 interview, his daughter Esther commented on her father's T.B. treatment in Saranac Lake: "Heroin was not limited at that time — my father took heroin. Patients were very content, kind of happy. [They] could use sputum cups here, but at home they couldn't." Further, "Papa wasn't eligible to go to Trudeau [Sanatorium] — too much money. Too much T. B., I think was the truth." Miss Mirick, who as a child was a witness to her father's illness and as an adult worked for the T.B. Society, said: “Many [patients were here] under assumed names. T.B. [was] like leprosy – a horror.” The family opted to stay in Saranac Lake after his death because they knew how much people outside of Saranac Lake feared the disease: "In the Catskills, you couldn't say you had T.B." 1

A brick at the Saranac Laboratory has been dedicated in the name of George Jarvis Mirick by his granddaughter, Emily Fogarty.