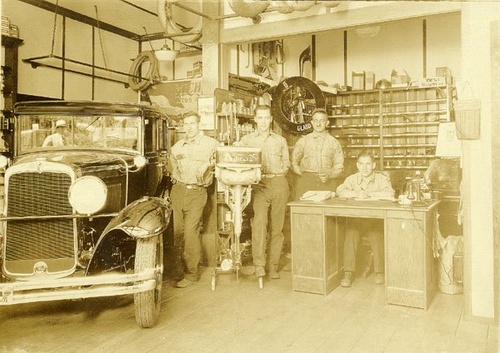 New address: Believed to be the wooded lot at 400 Broadway (between the Saranac Lake Baptist Church and Taylor Rental), for sale by the Village of Saranac Lake  in 2018

The Gladd Brothers Garage was an automobile dealer on Upper Broadway from before 1933 operated by Lee Gladd and his brothers, Monroe and Dick.

According to the Adirondack Museum,"The business started as a boat business in 1928, but quickly expanded and took on the franchise for Ford, Lincoln and Mercury Cars. During World War II, they operated a defense plant employing more than 200 workers, giving Saranac Lake one of the biggest payrolls ever known from its private industry. The Gladd Brothers sold the business in 1949."  The museum has more than fifty objects, mostly airplane parts, from the organization; a list is here.

One  of the  largest garage buildings in  this part of the state will  be placed under construction  in the immediate future  by  Gladd Bros. at Saranac Lake. The new  building will be a  two-story concrete block and steel construction with a front  of 99 feet and depth  of 63  feet.  It  will adjoin  the  present garage.

Gladd Brothers have put up a sizeable building along the rear of their large garage and sales rooms--for the storing and distribution of used automobile parts. In case you didn't know, the used parts business in the automobile field is growing rapidly. The firm has spent about ten grand during the past year for plant additions, and a quarter of this in addition for reconditioning of plant equipment and repairs.

Gladd Brothers are putting in high speed lathers, Shapers Milling machines, cutters and other precision tools, on the first floor of their large two-story garage building in Upper Broadway in Saranac Lake.

Temporary floors and partitions have been laid on the sales floors of the garage. The machines are most modern.

The machines will go into the production of parts for airplanes. Parts for machine tools will also be made. Later on the members of the firm plan to fabricate parts for the U. S. Navy, in addition to production of plane and tool parts.

The equipment was purchased outright by Gladd Brothers, and additional equipment will be acquired. The 16 machines acquired so far, cost about $10,000 per dozen. Others still to be acquired will cost still more.

The factory now being assembled must meet requirements of the War Industries board inspectors, and the character of the contracts to be undertaken will depend upon decisions of the government rating resulting from this inspection. The payroll of this undertaking, once in full swing, when combined with that of three or four other defense industries that are developing in Saranac Lake, will draw many men back to Saranac Lake, and Richard Gladd said that the total payroll of these firms no doubt will reach $10,000 weekly.

Six new 1949 Ford cars were opened to inspection on the display floor of the Ford agency operated by Gladd Brothers on Upper Broadway this morning. A small crowd was on hand at 8 o'clock to see the cars, and the crowd grew rapidly as the morning advanced. By 10 o'clock, Richard Gladd, sales manager, had a pocket stuffed with new orders and down payments.

The cars were advertised as all-new in design and construction, and they soon met the critical tastes of car buyers. They are an all-new car; the only thing that is left of the old Ford is the name. And it has been given new look.

The cars have the appearance of having jumped into a high-bracket price class, but prices of each car on display were clearly marked. Prices of the de luxe models are around $1,800—more or less, according to accessories desired. There are six-cylinder and eight-cylinder models.

Car owners were shown the new conveniences of the 1949 Ford line during the morning by Monroe and Lee Gladd, of the Gladd Brothers firm. The half-dozen car display is the largest that has been shown by any Ford car dealer north of New York city since the war.

The display room, also, is the largest Ford display room north of the down-state island city. It will be open for inspection of cars by the public during the day, and until 10 o'clock tonight and tomorrow night. […]

Village to auction property with a history of contamination

The village will auction two parcels of land on Broadway, between Taylor Rental and the Saranac lake Baptist Church . . .

One parcel has had a partial cleanup of contaminants left by a decade of industrial use, use as a dumping ground, and the storage of tar and waste on site. . . .

. . . Lot 3's association with manufacturing and industrial use started in the 1920s with the Gladd Brothers automotive and repair facility. At the onset of World War II, the structure was converted towards use in the manufacturing of "war related items reportedly involving aircraft landing gear and land mine fuses". . . .  After the war, the site was once again used for automotive repair, then for utility work and electrical equipment storage. All on-site structures were demolished in the 1960s. . . .