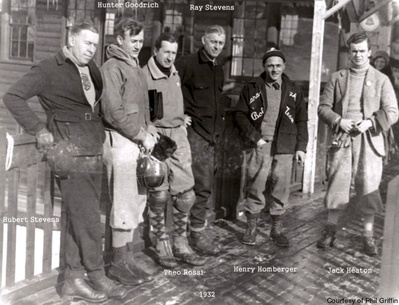 Henry Anton Homburger was a civil engineer and a bobsledder who competed in the early 1930s. He also worked with William G. Distin as the engineer on the construction of the Olympic Arena for the 1932 Winter Olympics in Lake Placid. 1

At the 1932 Winter Olympics in Lake Placid he won the silver medal in the four-man event with teammates Percy Bryant, Paul Stevens and Edmund Horton. He also designed the bobsleigh track used for those Winter Olympics.

He was born in New York City and died in Sacramento.

An excerpt from The Sun, sometime in 2020

Bobsled in New York and the North Country: The Early Days

. . . The construction of the first track in the United States, at Mt. Van Hoevenberg in Lake Placid, began in the late 1920's for the 1932 Olympic Winter Games. Lake Placid won the bid for these Olympic games over Chicago due to the cutting-edge design, the most challenging in the world at the time. Hank Homberger, from Saranac Lake, designed and built the track and it opened for passenger rides on Christmas Day in 1930. Homberger, and his team, the Saranac Lake Red Devils, set a new world record on it in 1932 and later he went on to win a silver medal in 4 man at the 1923 Olympics in Lake Placid. . . .

During the Games, the governor's wife (Eleanor Roosevelt) braved the treacherous curves of the Mt. Van Hoevenberg bobsled run. With Saranac Lake's Henry Homburger driving, Mrs. Roosevelt took her first bobsled ride from the half-mile mark. Later, she was reported to have taken seven rides down the Lake Placid Club's toboggan chute on Mirror Lake.