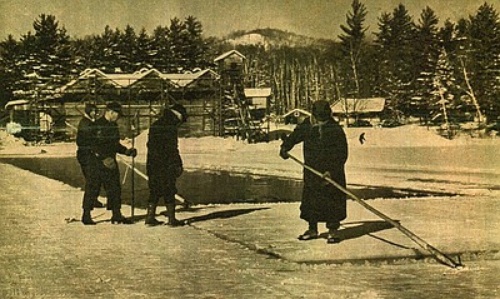 Ice Harvesting on Moody Pond, c. 1940. The raft of ice shown will be cut into between 60 and 100 cakes of ice. The ice house at Moody Pondis in the background at left (Syracuse Post Standard, February 25, 1940) Ice has been harvested in the winter for summer cooling from early in the 19th century. Some more recent, local history of ice harvesting includes the following 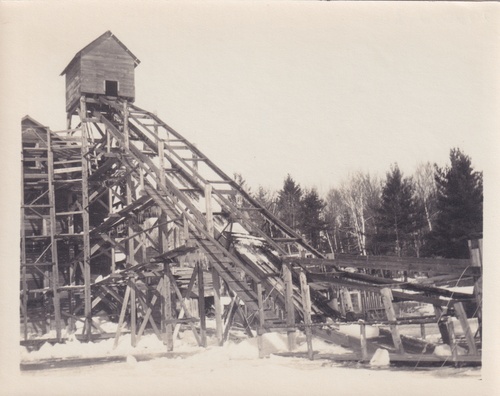 A winter tradition: Putting up the ice

Caretaker Carl Hathaway takes part in a tradition every February, when the nights are cold enough to make the Upper Lake moan with the making of the ice. This time of year Hathaway's thoughts are with how many men he will need to "put up the ice" and when the ice wall be thick enough for the ice house. Hathaway has been putting up the ice for the 30 years that he's been a caretaker, not counting the years he worked on the ice as a boy growing up just around the comer on the lake as a caretaker's son.

Hathaway carries on this tradition for "his people" because they still use ice from the icehouse in the summertime for water coolers and drinks as was common in years past. Carl said that many years ago all the caretakers from around the lake would get together to put in ice. They would work for about six weeks and fill everyone's icehouse, traveling from camp to camp on the lake. When Carl started at 12 years of age they used teams of horse to plow and haul the ice. The men would be promised a good hearty meal at noontime and pay for each day worked. Carl spoke of his dad, Albert Hathaway, and the ice back then.

"Dad would try the ice in different places on the lake to get the best ice, then they would cut there even if it was quite a piece from the camp."

One time he remembered hauling ice on a truck across the ice, standing on the running boards.

"That's the only way to ride in a truck full of ice — if the truck goes through the ice, you jump off!"

All of a sudden the riders felt the truck going through the ice so they jumped clear, but the truck stayed up, except for the tires. There it sat with a full load, up to the axles with all four tires through the ice.

"Took a while to get that one out!"

The "boys" who work for Carl come from all parts of the area. All seemed to have different reasons for tackling this once-a-year job. For the most part the reason was to be a part of the history and tradition, something to tell their grandchildren later on. Some said, "It seemed like a good idea when Carl called." Another said, "It's OK for three days but I wouldn't want to do it for any longer than that!"

Tom Phillips, Hathaway's son-in-law and manager of Bartlett Carry, says that after doing it for 18 years, he'll do it for as long as Carl does. Chris Woodward from Gabriels is a long-time helper, having been one of the "boys" for 10 years. This year Dave Litty and Steve Carnel rounded out the team of "old timers," both having prior experience. They seemed like a good team and knew what the job involved.

There never seems to be a perfect day for icing but a good day is when it is 0 to 10 degrees above. Below that temperature the ice field freezes quickly leaving the blocks with a sharp skirt around the top, which is dangerous and hard on one's shins. Also, the ice is brittle when very cold and breaks apart when it is dropped into the icehouse. Above that temperature the ice is wet and soft, causing tools to stick in it, making it hard to handle. Tom has seen more than one block of ice drop into the icehouse with the tongs from the handler above still embedded in the block.

Johnson plaid jackets, Malone pants, buckskin mitts and just plain warm clothes were de rigueur for the day. About half way through the second day of icing, with the temperature at 20 degrees, a lot of the outerwear is pealed off, for the wool, even when wet, stays warm. Even if there is snow on the ground and a chill in the air, one still raises a sweat putting in the ice. There have been many icing years when the winds blew and the temperature was below 0, making even Carl wonder if it was worth the effort after having to thaw out the tips of his ears and the icy beards of the boys.

The first day of icing only requires two men. Steve helps Carl clean off the ice and, using a line stretched between a wrench and a shovel, marks a cutting line. Carl uses this line to make the first cut with the gas-powered ice saw. With the first cut of the saw a plume of snow and then ice-dust flies into the air. Standing on the ice, one can feel the pressure being released under your feet as the lake lets out a moan. It's an erie feeling.

After the first line is cut Carl makes a succession of parallel cuts using the side of the ski on the icesaw as a measure. Carl cuts 21 lines one way and then begins in the middle of the field cutting in the opposite direction. Steve keeps the cut clean and tamps in several areas on each cut to keep the field from flooding and freezing solid if the ice should happen to crack. The tools for icing are not many but could not readily be replaced. The gas powered ice saw looks somewhat like a snow blower but with an ominous looking 30-inch blade in the front that makes an 11-inch-deep cut in the ice. Then there are "pike poles" — 10-to-12-foot wooden poles with a point and a hook on one end, enabling the men to push the floating blocks along and pull them up the chute.

The rest of the equipment consists of a large set of ice tongs, a breaker bar and a chisel. Cutting the ice is a long, painstakingly slow process. The blade has to do its work. If you rush it, it jams and then has to be pulled up out of the ice and let run to clear itself before you can go back to cutting. The only sounds that are heard is the "Blaa-aat" of the saw's motor and the singing of the blade. When the last cut is made, sticks are stuck in the cuts to mark the sides of the field until tomorrow.

After blowing the snow off the ice on day two, the men use a one-man bucksaw to cut the blocks apart, sometimes using a chainsaw to get the first cut started. The first block is lifted out and set on the ice with the ice tongs. Chris works with the one-man saw about a third of the way down the line of blocks, freeing two sides of each block. Using the breaker bar. Carl breaks the blocks apart and floats them to Steve and Dave. They use the pike poles to pull the blocks up the chute, where Dave uses the ice tongs to pull the block onto the truck. They continue this process until all 400 blocks are loaded and carted to the ice house by the truckful. At the icehouse another wooden chute is chained to the back of the truck. Using tongs two men pick the blocks up and push them down the chute to Tom. A good pair of boots is needed for this job, protection against dropped blocks and the cold of the ice. Even though Tom has shed his jacket and works in vest and shin sleeves, one can still see one's breath.

At 10:19 am, with the second load in the icehouse it's time for a coffee break. Carl's wife, Valda, makes sure that the coffee's hot and the homemade donuts are waiting. At noon a lunch of chili and baking powder biscuits waits for the men. The men talk about how the icing is going faster this year. Tom credits it to "young blood" and past experience. The men all work together as a team, each pulling his own weight They all take their turn at the different jobs during the day with the exception of Tom, who pretty much stays in the icehouse putting together what he considers a jigsaw puzzle. Two sides of the blocks are fairly square, where the saw cut them through, but where [sic]

By late afternoon the ice is all in the icehouse and the men are enjoying the last coffee break of the day.

There are some sore backs after the job. When the job is done five men will have each handled some 1,014 tons of ice at least twice, sometimes three times. At the close of day two, there is no question how these five men will sleep that night.

Two men are required for the last day of the icing. A clear day with a promise of weather coming in, Steve and Dave first chop a hole into a pile of sawdust piled in front of the icehouse. If they are lucky, there is only about 12 inches of frozen sawdust to chop through, if not they must chop the entire block into manageable pieces. Shoveling the sawdust into the icehouse, they mound it high over the top of the blocks. This is done so that it will insulate the ice and keep it for the summer. With this finished, the three days of putting up the ice are over.

During the summer the sawdust is kept at an even depth across the top of the ice, ensuring that no air holes get in the ice, which make it melt faster. Only about a 6-inch block of ice will be left out of the original 18-inch block. The blocks, when first cut, started out composed of about 2-inches of snow, 6-inchcs of snowy ice and 8-to-10-inches of "blue ice." All that will be left in the summer is the blue ice.

Considering how much the lake has given to those who live here, with the fishing, the beauty and the ice, it's no wonder that Carl and the men, in their own way, enjoy their part in history. As far as Carl is concerned, he said, "It's just one part of my job as a caretaker, but a good job... when it's done!!!"