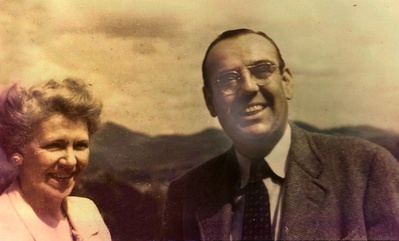 A brick at the Saranac Laboratory has been dedicated in the name of James Roosevelt Waldron by his daughter, Joanne Dwyer.

"My parents got engaged at Christmas, 1927. At the suggestion of his father, he went for a physical. On New Years Day, 1928, he and his oldest brother were on a train en route to Saranac. He first cured at the Hudson Cottage owned by Camilla Hayes Hudson, whose brother, Dr. John N. Hayes was dad's TB doctor and later our neighbor in Glenwood. The cottage became the Carmelite Monastery and is now the home of Paul Willcott. Dad then moved to the Noyes Cottage on Helen Hill. Years later, Aunt Kitty Noyes became my brother's godmother. I'm guessing that he moved back to New Jersey around 1930 because my parents were married on 10/12/31.

In September, 1936, his TB returned and we moved to a rented home in Glenwood Estates. I was 2 1/2, my sister was 6 months old, and mom was pregnant with my brother. We lived there for 7 years, returning in September, 1943. We spent July and August in Saranac until 1954. Fortunately, the TB never returned. While in Saranac, dad studied Spanish at the Saranac Lake Study and Craft Guild with Alfredo Gonzalez.

We had a Boston terrier dog when we lived up there. When ever he had a chance he would run away and head straight for the Erkander Cottage because Mrs. Erkander would feed him... It was on the corner of Kiwassa Road and Birch Street. Jeff Branch lives across the street from it. His mother is a close friend of mine."