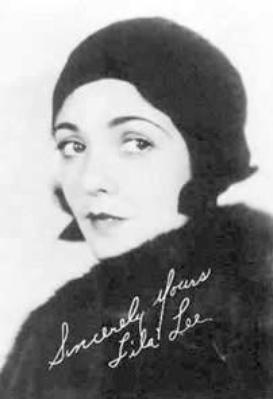 Lila Lee (born Augusta Appel) was an actress, and a patient at 88 Riverside Drive and later at Will Rogers Hospital.

Miss Lee's career spanned a period of more than 50 years, and the eras of vaudeville, silent movies, talking pictures, radio and TV.

Hollywood gossip columnists had linked her romantically with Rudolph Valentino and Charlie Chaplin.

She was born in New York City, a daughter of Charles and Augusta Appel.

She started acting at the age of five when, known as "Cuddles," she appeared with Gus Edward's School Days Review. She went on to headline the Palace Theatre with Georgie Price, and then was summoned to Hollywood by Jesse Lasky and Paramount when only 12 years old.

With her name changed to Lila Lee, she embarked on a lengthy and successful screen career, appearing in approximately 150 films, first silent, and later sound. She appeared opposite Valentino in "Blood and Sand," with Gloria Swanson and Thomas Meighan in "Male and Female," with Lon Chaney in the sound version of "The Unholy Three," with Richard Barthelmess in "Drag" and "Flight."

Later she appeared on radio, television, Broadway, and on tour in plays such as "The Bride Retires," "You Can't Eat Goldfish," "Blind Alley," "Claudia," "Private Lives," "Kiss and Tell," and "Josephine."

She was married to the art director, James Kirkwood, and they had a son, James, Jr., the novelist, who survives.

Miss Lee also had been a patient at Will Rogers Hospital in 1961. At that time she recalled playing with Will Rogers in "One Glorious Day." She was the heroine and "Will was a shy and prissy professor, unable to express his love until, by accident, he took a drug that transformed him into a Lochinvar come out of the west. You can imagine the comedy that resulted."

Her family has requested that memorials for Miss Lee take the form of donations to Will Rogers Hospital.

Miss Lee's most recent home was in Key West, Fla.

In addition to her son who lives in East Hampton, she is survived by a sister, Mrs. Peggy Hilmer of Elyria, Ohio.

A memorial service will be held in Elyria.

Saranac Lake, June 3.—To the current teen-age generation of movie-goers the news that Mrs. John E. Murphy, the former Lila Lee, is at Saranac Lake would mean little or nothing. To their parents, however, the name will bring back memories of an earlier time when Rudolph Valentino was the idol of American movie fans. For Lila Lee was leading lady for Valentino in the original silent version of "Blood and Sands." A trouper from the time Gus Edwards first "discovered" her at the age of five and persuaded her parents to let her go in his "Kid-die Revue," Miss Lee took her first film test at the age of 16. Her first picture was "The Cruise of Make-Believe with the late Wallace Reid. Shortly after, she was given a five-year contract by Paramount studios.

Then, she went on the stage and appeared in "The Bride Retires," The Fool," "The Man Who Came Back" and other successes. Returning to Hollywood she was dogged by bad luck until she was given the feminine lead in "Drag," with Richard Barthelmess.

She scored so heavily in this picture that she was given a contract by First National Pictures. With this company she made "Dark Streets," "Woman Hungry," "The Gorilla" "Misbehaving Ladies" and other film hits of an earlier day.

Now resting at Saranac Lake at 86 Riverside drive, where she has been for the past eight months, Lila Lee does not look as though she were taking a rest cure. She is the picture of health, with dark wavy hair framing her face and the eyes that always sparkle.

Miss Lee said that she really enjoys her stay here, although when Dr. J. N. Hayes, her physician, calls she tries to find out when she can go back to New York. The actress spoke very highly of the people in Saranac Lake, stating that they were more than obliging and also they seemed to try to use people well who were visitors in their midst. She mentioned especially Miss Dorothy Hayes, assistant librarian, who watches out for her reading.

At present she is being visited by her son, James Kirkwood. He is a stalwart young man, wearing the discharge button of U. S service.