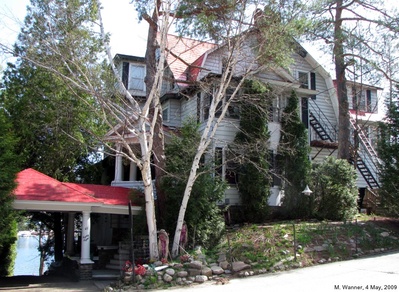 Other information: The former 88 Riverside Drive was the Lynch Cottage, a nursing cottage, highly rated, operated by Katherine Lynch, a nurse and a former patient herself. All rooms had porches. It was originally the Musselman cottage; in 1908, Benjamin Mann's; in 1911, under the name of Converse. A Professor Wheeler taught violin here at one time. Other names associated with this house are Bakewell, Mayer & Mayer and Owens. 2 Also home for a time to Patrick Raymond MacDermot and the actress Lila Lee.

At the end of the cure era this house was remembered as the Lynch Cottage, along with its neighbors, the Knabe Cottage (to its left, from the street) and the Spear Cottage, to the right, a little enclave of large, private commercial sanatoria. An article, titled "Cottage Calls, about Spanish patients in the Lynch Cottage, appeared in The Guild News in October 1941.

The Lynch Cottage caught fire on the night of November 22, 2014, and in the course of the fire, large portions of the building collapsed. The cottage had been converted to apartments, but was occupied only by the owner, Ed Dukett, who escaped with one of his two dogs. The building is a total ruin. See the Adirondack Daily Enterprise of 11/24/2014 for details.