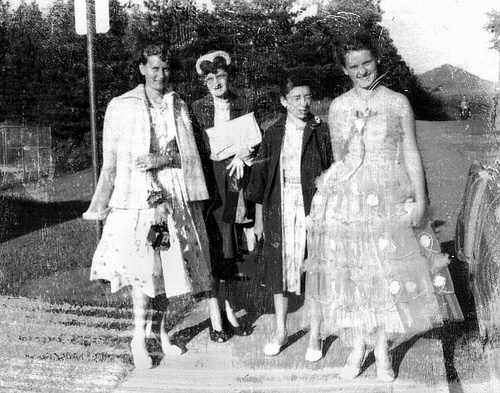 Her granddaughter described her arrival in Saranac Lake, saying that Mary was “too weak and sick to get out of bed, [she] had to force herself to eat, starting with a teaspoon of food at every meal and slowly, day by day, adding to that amount.” Mary's TB Society White Card indicated she stayed at 19 Broadway. After spending seven years taking the cure in Saranac Lake, she was considered cured and returned home to New York.

Her return home was to a stressful living situation, which was difficult for a woman just recovered from TB and coming off of seven years of convalescence. Just over a month later, she left her family in the night to return to Saranac Lake.

She met Donald Seney sometime after her return north, and Frederick filed for divorce. She and Donald had three daughters, Kay, Jean, and Sue, despite doctors' warnings that Mary was too old and too infirm for a successful pregnancy.

Mary eventually worked for Newberry's Department Store, and she and her family would split their years between Florida and Saranac Lake. She also worked for a department store in Florida during the winters.  Her granddaughter remembers her as "always stylishly dressed, and very talkative, but not necessarily about herself," in a family history written in 1989. See below for the entire document. 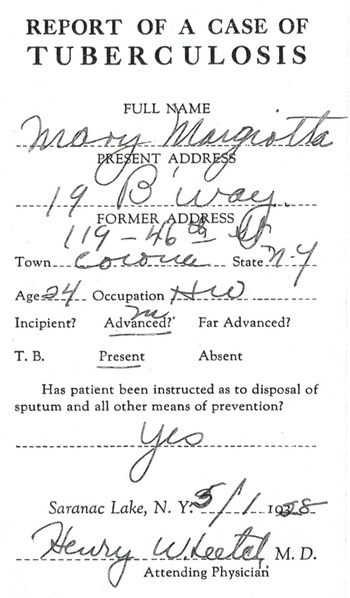 Mary Seney's TB Society White Card, 1928. Courtesy of Jean Seney Parker.Mary Catherine Blakeley Seney -- A write-up of Mary Seney's history, written by her granddaughter Jean in 1989 and given to Historic Saranac Lake in 2019.

My maternal grandmother, Mary Catherine Blakeley, was born to immigrant parents on 18 October 1904 in Flushing, New York. Her father, Paul Henry Blakeley was from England and her mother, Catherine McCafferey Blakeley was from Ireland. It is not known what Paul did for work but after his death in 1909 my great-grandmother went to work as a domestic servant in Brooklyn, NY.  Mary had two sisters, Margaret, and Roseanna. Margaret or as she was most often called, Bobbie, grew up to be an actress and died in 1950. As for Roseanna, nothing is known about her and for all we know, she could still be alive.

Mary married Frederick Margiotta, a son from a large Italian family in 1922. By this time women had the vote for two years but it is not known how Gram reacted to this hard won victory. In 1923 Gram had a son, Nicholas Frederick, and when he was a little over a year old, Gram was diagnosed with tuberculosis. In 1928, accompanied by her mother, Gram went to Saranac Lake, New York, to die. Too weak and sick to get out of bed, Gram had to force herself to eat, starting with a teaspoon of food at every meal and slowly, day by day, adding to that amount. After seven years of “curing” in Saranac Lake, my grandmother was considered cured of TB.

In 1935 Gram returned to New York City, to Mr. Margiotta and her nine year old son who was quite the stranger to her now. My grandmother tried to convince her husband to move out of his family home so that the burden would not be so much for her. Apparently the custom in this family was for each of the offspring and their families to take turns taking care of the house and meals for the rest of the family. For a woman who was just recovering from tuberculosis, the strain on her health must have been tremendous. Mary was not successful in her attempts to get Mr. Margiotta to move. He was very uncooperative and would stand out on the sidewalk while Gram looked at apartments and shopped for furniture. A little over a month after her return to New York and her husband, my grandmother left Mr. Margiotta and her son, sneaking away in the middle of the night.

Mary returned to Saranac Lake where it is believed she stayed with friends for several years. During this time Gram met my Grandfather, Donald Seney and Mr. Margiotta filed for a divorce, the grounds, the only acceptable ones at that time, adultery. By now the Great Depression had really struck this small Adirondack community, and work of any sort was scarce.  It is not known what my grandmother did for money as she never worked out of the home until 1949. Mary and Donald finally got together and in 1938 their first child, Kay, was born.

My grandmother was 35 years old when my aunt was born. I don’t know if Gram thought of the risks she was taking, but she got pregnant again in 1939. Due to her age and her fight with TB, Gram was made to have an abortion and was advised to have no more children. On 16 February 1940, my mother, Jean, was born. Shortly before or after my mother’s birth, my grandparents were, because of their financial status, forced to move in with Gramp’s parents.

This situation was quite terrible and to say the least quite depressing and also a little scary. My great-grandmother, Edith, was a very mean and terrible woman. My mother said this woman could even be considered evil. She treated Mary and her son Donald as if they were little more than animals. Gram never had enough to eat so Gramp would leave candy bars in my mom’s bassinet so she would have something to keep her energy up. My great-grandfather predicted his wife would end her days in Ogdensburg, a mental institution, and that is exactly what happened.

On more than one occasion my grandparents tried to survive living on their own. They were not able to do this until just before my Aunt Sue was born in 1943. My mother remembers this very well as Aunt Sue was born at home and she got to see her little sister within a few short hours after her birth. By this time, Gram was 40 years old and at that time, considered much too old to be having babies.

My mother relates that though her parents were poor their home was very happy and Gram was always there for them. When my mom and her sisters were little, Gram used to keep their hair very short but, as they got older she let it grow. One time my mother got her hair all tangled in the strings of the swing. Gram refused to cut my mother’s hair and worked for hours untangling it and did not finish until after dark, when she worked by flashlight! Either my grandmother was very stubborn or very determined. At one point too my Gram insisted that her daughters all take piano lessons. At 25 cents for a half hour these lessons were quite dear and the girls remember it as something their parents sacrificed for.

In 1949 for the first time in her life, my Gram took a job. She worked as a sales girl in Newberry’s Department Store off and on until 1954. Though she did not make much money her income was the only thing sustaining the family. Grampa was not able to find work and also in 1949 he moved his family to Florida in the hope of finding something better. In Florida Gram worked at another department store called Keege’s [Kresge's?]. For the next 20 years or so Donald and Mary spent their winters in Florida and their summers in Saranac Lake.

My grandmother, who had been exposed to blacks, but not to segregation was shocked at what she saw in the south. She was quite upset at the fact that blacks were made to sit in the backs of buses, had certain seats in restaurants, separate water fountains and could only use certain toilets. One incident that amused my grandmother was the time a black woman asked Gram for some colored toilet paper. Gram had no idea what she was talking about as there was no “colored” toilet paper to be found.

The memories I have of my grandmother are of an old woman, always stylishly dressed, and very talkative, but not necessarily about herself. Gram loved Elvis Presley, her Pekingese dogs, Andy Williams, watching golf, and the Miami Dolphins. She and my Grandfather always seemed to be bickering but I could tell they shared a deep affection for each other. Gramps’ pet name for Gram was Beegle [?], and no-one knows where it came from or what it meant!

My mother said she was pregnant with me when one of her aunts told her that her parents never married! She was quite shocked but never confronted her mother as she was sure Gram would deny it and to my mom, who had her doubts, could not have borne having her mother possibly lie to her. In 1969 my Aunt Sue received a package addressed to her parents. She said it was from a judge in Georgia and seemed to believe it contained her parents’ marriage license or certificate. Aunt Sue was sure Gram and Gramp got married on their return trip from Florida so Gram would be entitled to Gramp’s Social Security should anything happen to him. None of my grandparents’ papers can be found so this can not be proved. On 10 February, 1976 my Gram died in Lake Placid, New York.

Now that I can appreciate what family history is about I wish I had paid more attention to Gram and tried to find out more about her. I hope this partial history would make her happy and that she would forgive me any errors I made in my ignorance. Wherever you are, Gram, this one’s for you.