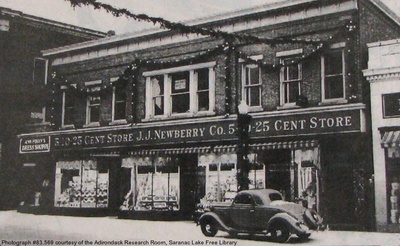 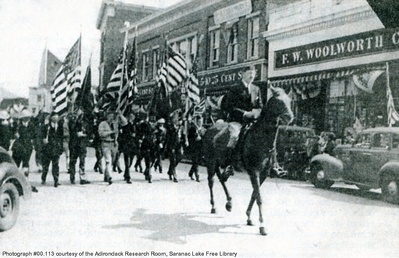 Newberry's was a five and ten cents store that competed with F. W. Woolworth from 1930 until 1959, when Woolworths moved out and Newberry's expanded into the space.

The present Sears building is the rightmost third of the original Newberry's building, joined to the Woolworths building and heavily remodeled to make the two buildings appear to be one.

The building appears to have been built in 1928 by F. H. McKee, and opened in January 1929 as the McKee's Store, later McKee's Shop, selling clothing and furniture. One year later, the building was sold to Newberry's.

The Mrs. Lucius Evans Cottage occupied this space through at least 1903; by 1908, the buildings that would become Newberry's were added to bring the front out to the street line. It appears from the Sanborn Maps that the much of the original structure was still inside the buildings that accreted around it through at least 1924. There may still be some of the original structure at the core of the present building.

Early last week announcement was made by Frank H. McKee of Saranac Lake that he had sold the McKee building on Main street, that village, to the J. J. Newberry Realty company of Wilmington, Delaware.

While the terms of the sale were not made public, it is said that they set a new high figure for realty transactions in Saranac Lake.

The negotiations were carried out through the office of Alfred A. Moody, broker, of Saranac Lake. The McKee building was considerably damaged in a fire last summer. It is understood that the major part of the remodelled structure is to be used for a chain store. Mrs. McKee will use part of the first floor for her dress shop. 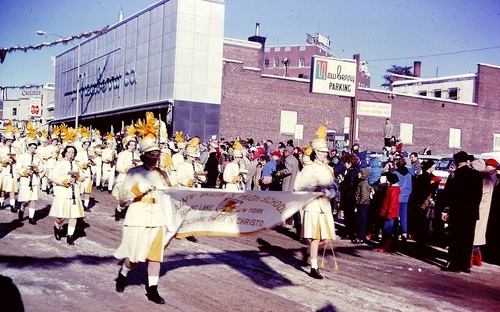 SARANAC LAKE — The local J.J. Newberry's store will not be affected by the filing of its parent company, McCrory Corporation, for protection under the Chapter 11 bankruptcy law.

Jack Langan, manager of the Saranac Lake Newberry's store, said the location will not be affected by the filing. "We will continue to operate as normal," Langan asserted. He said there will be no changes in local personnel and the store will continue to carry the same volume of merchandise.

The company was forced to file for protection after over $75 million in outstanding bonds reached maturity ahead of schedule last year, according to a statement released Wednesday by the company. The company had been negotiating with bondholders since last year when they exercised the option to call for payment of the bonds two years early.

The need to pay back the bonds, combined with the poor retail market, forced the company to seek court protection in order to restructure, the statement said. The outstanding bonds also made it difficult to obtain additional financing, the statement said.

While McCrory, one of the nation's largest operators of dime stores, is having financial trouble, that is not the case locally with Newberry's. In fact, despite the poor economy, the village location has been thriving in recent years, said Langan. "The last two years have been far more profitable than any other year since McCrory's acquired Newberry's," he explained.

In its petition for Chapter 11, McCrory's stated that it has debts of approximately $543 million and total assets of $672 million. The company's outstanding debt totals $223 million, with more than 85 percent due after 1995.

In January the company closed 229 of its stores and in March of last year it shut down 102. There are no plans to close additional locations.

Newberry to close in April

SARANAC LAKE - One of the anchors of the Main Street business district, the J.J. Newberry & Co. department store in Saranac Lake, is scheduled to close this spring.

And while the closure had appeared immanent after its parent company, McCrory's Corp, declared bankruptcy in 1992, employees there were optimistic about the local store's success. But it was eventually McCrory's financial problems that caught up with them. The local Newberry store employs four people.

"It hurts to see this close," said Marjorie Hough, who has been the store's assistant manager for over two years. "I love my customers."

McCrory's is closing its 300 stores because of its inability to reduce its loans, according to a story in Tuesday's Watertown Times. The Times quoted McCrory's chief financial officer Paul Weiner as saying that the stores would close at the beginning of April and would soon hold going-out-of business sales.

Weiner did not return messages left at his office Wednesday seeking comment.

Newberry's carries a variety of merchandise, including furniture, appliances, clothing and even some food.

"We carry a little bit of everything," Hough said. She and Manager Jeff Bassett had worked to pull the store together over the past two years and make it look nicer and more organized and had hoped to be successful.

Peggy Toohey was the manager of the lunch counter during the 1980s. She enjoyed her time there and can't imagine the village without it.

"I think it will be a great loss to Saranac Lake," Toohey said. "It's going to be another empty building... I just can't see Saranac Lake without a J.J. Newberry." Marguerite Elithorpe retired from Newberry's in 1988 after working at the counter. She says when the lunch counter was bigger, it brought a lot more people into the store.

"It was really busy," Elithorpe said.

The owner of the building is Howard' Simons of Western Equities and Skyrise Construction of New York City. Simons could not be reached to talk about the future of the building.

But that future might be of interest to the village, which leases the Newberry's parking lot and uses it for municipal two-hour parking.

Village Manager Pat Fitzgerald said the village sub-leases the parking lot through McCrory's, but does not know yet what the future holds for the parking lot or the building. He noted that this follows Aubuchon's moving up Broadway to the old Grossman's building and the closure of the Clothes Closet, another downtown storefront.

"It's a tragedy," Fitzgerald said. "We're going to see two major and one minor store fronts vacated for a little while, and that's a little bit of a concern."

A mural painted by school district students and sponsored by local arts and youth groups and the municipalities is also on the side of the Newberry building, and its future is in doubt.

Employees will not be given severance nor vacation pay, according to the Times.

According to the Times story, which examined the bankruptcy court papers, McCrory's Corp. missed a Dec 31 deadline to reduce its loans and accrued interest.

I loved the downstairs in Newberry's. Toys and turtles! My mom sewed and we bought a lot of material down there too. My minds eye of the downstairs is amazingly clear. Tools and hardware in the back downstairs...

The fabric department was down the stairs in the middle of the store. At the foot of the steps it was on the right.

There was also a pet department down there. Parakeets.

Newberry's had a lunch counter. I remember around 1971-72 they had balloons above the counter with prize tags on them. If you picked the correct balloon, you might get something for free. I had my very first soda fountain Sunday after picking a balloon with a "free" prize tag.