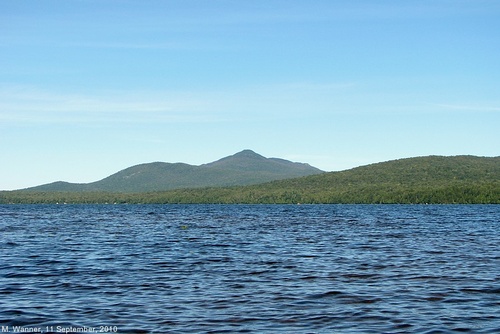 Meacham Lake looking north from near the south shore. Debar Mountain is on the horizon. Meacham Lake is a 1,203-acre lake eight miles north of Paul Smiths. Most of the lake is in the town of Duane; the southernmost shore is in the town of Brighton. It is a part of the Debar Mountain Wild Forest. There is a state campground at the north end of the lake.

According to Lake Placid-North Elba Historian Mary MacKenzie, in tracing the route of the Old Military Road, "The fork [where the road to Malone meets one coming from Santa Clara and St. Regis Falls] would be known one day as Meacham's Corners, for that mighty nimrod of the Adirondacks, Tom Meacham, and his cabin close by." See MacKenzie, The Plains of Abraham, page 27.

The Meacham Lake Hotel was located at the north end of the lake until 1921. The state purchased the most of the land around the lake in 1931-32. In 1934, a campground was built on the hotel site by the Civilian Conservation Corps. In 1946, 29 trailer sites were added to the campground; it was further expanded between 1965 and 1971. 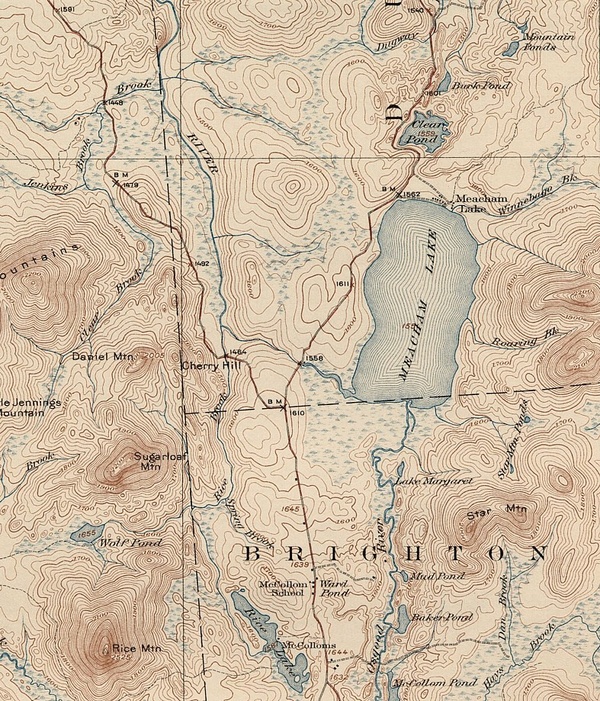 TROUT FISHING.—The editor of the Ausable River Gazette, tells of a trout caught in Saranac Lake weighing twelve pounds, and seems to think this a pretty good sized fish; but we have something that will rather take the "rag" off that "bush." S. W. GILLETT, of Constable, in this County, recently returned from an excursion to Meacham Lake, with a trout which weighed 28 pounds, and measured one foot across his caudle extremity.

PRIVATE PARK.—PURSUANT TO SECTION 27, Chapter534, laws of 1879, as amended by section 4, chapter 531, laws of 1879, entitled: "An act for the preservation of moose, wild deer, birds, fish and other game," notice Is hereby given that the following lands and water are dedicated for the purpose of a private park or territory for propagating and protecting fish, birds and game, viz :—

The above, under date of February 2d, 1885, was duly posted and has since been held as a private park property. I now, by this notice duly published, and by posting as the law directs, add the following lists of lots and parcels of land :—

From this date all of the above described lands and the waters included within such lots and parcels of land must be respected as private property under the penalties of the law.

Clear and Buck Ponds are entirely within the above lots, also the south shore of Meacham Lake, and the inlet, or the Osgood River, for a distance of 28 chains south from Meacham Lake.—Dated Duane, March 28, 1895. —A. R. FULLER.

And notice is hereby given that the described lands and water will hereafter be used as a private park for the purpose of propagating and protecting fish, birds and game. All persons are hereby forbidden camping, cutting, peeling bark, building fires or trespassing in any way upon said territory. The whole territory will be posted by sign boards, as the law directs. —A. R. FULLER.

…One of the most charming spots in the whole Adirondack region is Meacham Lake, which is a favorite objective point for drives from Paul Smith's, Loon Lake, and Malone. Mr. Fuller, who for some time past has been in poor health, has returned to the Meacham Lake House, and will be in charge there this season...

FISHING EXPERIENCES AND OTHER REMINISCENCES

When S. M. Howard was manager of the Meacham Lake Hotel the writer was a frequent visitor there in company with other fishermen. The first few seasons Mrs. J. H. Putnam, a sister of Mrs. (Dr.) Oliver and Geo. W. Dustin, was employed as hostess and she certainly had the art of graciousness and always made everybody comfortable. Miss Sadie Richey was behind the desk as telegraph operator and under Mr. Howard's management the hotel did a fine business.

A good many guides were regularly employed. I knew them all well and frequently spent an evening at the guide house. Among them I recall Lyman Debar (father of George Debar) after whom. Debar Mountain was named, and who was guiding daily after he had passed the 80th milestone, Wm. H. Sprague, Zeke Perkins, Charley Haskins, Dave Stickney, Burt Burr, Robt. Ladd, Richard Ladd, Bill Center and several others. What a fine lot of men they were!

On some occasions when the lake and speckled trout were biting well, I have seen enough fish in the hotel cooler to stock a wholesale market. F. J. Taylor and Arthur H. Mould, expert fly-fishermen, often made big catches in that territory. The late Charles A. Smallman was a good fisherman and one of the handsomest baskets of speckled trout I ever saw at the hotel was brought in by him.

Originally there were no great northern pike in Meacham Lake but some culprit put a few in Osgood Pond a good many years ago and they gradually worked down into the lake.

As a young man I fished Meacham outlet one day in company with the late B. L. Reynolds. What a catch we made that day! There was no end to the fish but we did not take more than we should.

Not long ago I was again there and as I worked along gingerly over the stony bottom I was reminded of what the late Frederick J Seaver told me a few years ago. He, too, fished the same stream as a boy and I happened to know that when he was quite well along in years, but young in spirit, he again went over the same ground. I asked him how it compared with his first trip there. He replied that there were less fish but he enjoyed it except for one thing: "Some damned rascal had been down along the river and greased all the stones!"